The greatest dangers to liberty lurk in insidious encroachment by men of zeal, well-meaning but without understanding.

Louis Brandeis
Publicity is justly commended as a remedy for social and industrial diseases. Sunlight is said to be the best of disinfectants; electric light the most efficient policeman.

Louis Brandeis
America has believed that in differentiation, not in uniformity, lies the path of progress. It acted on this belief; it has advanced human happiness, and it has prospered.

Louis Brandeis
Those who won our independence believed that the final end of the State was to make men free to develop their faculties; and that in its government the deliberative forces should prevail over the arbitrary. They valued liberty both as an end and as a means. They believed liberty to be the secret of happiness and courage to be the secret of liberty.

Louis Brandeis
If we would guide by the light of reason, we must let our minds be bold.

Louis Brandeis
Denial of the right to experiment may be fraught with serious consequences to the Nation. It is one of the happy incidents of the federal system that a single courageous State may, if its citizens choose, serve as a laboratory; and try novel social and economic experiments without risk to the rest of the country.

Louis Brandeis
To take risks is the very essence of Jewish life, that is, to take necessary risks. The wise man seeks not to avoid but to minimize risks. He minimizes them by using judgment and by knowledge and by thinking. These are, fortunately, preeminently Jewish attributes.

Louis Brandeis
The Court bows to the lessons of experience and the force of better reasoning, recognizing that the process of trial and error, so fruitful in the physical sciences, is appropriate also in the judicial function.

Louis Brandeis
Man is as the Lord made him. But we can change our institutions.

Louis Brandeis
Obsessed with the delusion that two and two make five, he fell at last a victim of the relentless rules of humble arithmetic. Remember, O Stranger! Arithmetic is the first of the sciences and the mother of safety.

Louis Brandeis
I abhor averages. I like the individual case. A man may have six meals one day and none the next, making an average of three meals per day, but that is not a good way to live.

Louis Brandeis
Subtler and more far-reaching means of invading privacy have become available to the government. Discovery and invention have made it possible for the government, by means far more effective than stretching upon the rack, to obtain disclosure in court of what is whispered in the closet.

Louis Brandeis
The best of wages will not compensate for excessively long working hours which undermine heath.

Louis Brandeis
There is in most Americans some spark of idealism, which can be fanned into a flame. It takes sometimes a divining rod to find what it is; but when found, and that means often, when disclosed to the owners, the results are often most extraordinary.

Louis Brandeis
If there be time to expose through discussion the falsehood and fallacies, to avert the evil by the processes of education, the remedy to be applied is more speech, not enforced silence.

Louis Brandeis
Fear of serious injury alone cannot justify suppression of free speech and assembly. Men feared witches and burned women. It is the function of speech to free men from the bondage of irrational fears.

Louis Brandeis
They [the makers of the Constitution] conferred, as against the Government, the right to be let alone—the most comprehensive of rights and the right most valued by civilized men.

Louis Brandeis
No danger flowing from speech can be deemed clear and present unless the incidence of the evil apprehended is so imminent that it may befall before there is an opportunity for full discussion. Only an emergency can justify repression.

Louis Brandeis
Crime is contagious....if the government becomes a lawbreaker, it breeds contempt for the law.

Louis Brandeis
Nearly all legislation involves a weighing of public needs as against private desires; and likewise a weighing of relative social values.

Louis Brandeis
Fear breeds repression; that repression breeds hate; that hate menaces stable government; that the path of safety lies in the opportunity to discuss freely supposed grievances and proposed remedies; and that the fitting remedy for evil counsels is good ones. 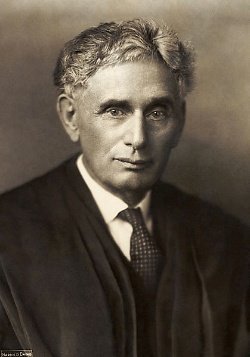 Creative Commons
Born: November 13, 1856
Died: October 5, 1941 (aged 84)
Bio: Louis Dembitz Brandeis was an American lawyer and associate justice on the Supreme Court of the United States from 1916 to 1939. He was born in Louisville, Kentucky, to Jewish immigrant parents from Bohemia, who raised him in a secular home.
Known for:
Most used words:
men, liberty, free, speech, success, government, believed, law, social, risks