Woman, then, stands in patriarchal culture as a signifier for the male other, bound by a symbolic order in which man can live out his fantasies and obsessions through linguistic command by imposing them on the silent image of a woman still tied to her place as the bearer of meaning, not maker of meaning.

Laura Mulvey
In a world ordered by sexual imbalance, pleasure in looking has been split between active/male and passive/female. The determining male gaze projects its fantasy onto the female figure, which is styled accordingly. 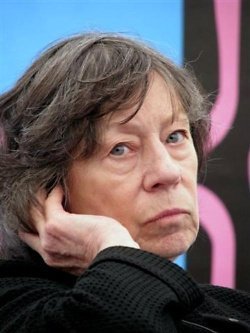 Creative Commons
Born: August 15, 1941 (age 78)
Bio: Laura Mulvey is a British feminist film theorist. She was educated at St Hilda's College, Oxford. She is currently professor of film and media studies at Birkbeck, University of London.
Known for: