Kim Wilde
Is our time up and on to the next fire / Got my fingers burnt and cut into the wire.

Kim Wilde
I'm spending nights just dreaming / And playing the music loud / They're banging on the ceiling / They're praying that I'll soon be out.

Kim Wilde
I think that not being loved by your parents or not having a brother or not being liked at school or even wearing glasses can be a lot worse than having a famous father.

Kim Wilde
Snap your fingers and somebody runs / You don't care how they feel just as long as they come / Got your head in the stars now you've come this far / Just who do you think you are?

Kim Wilde
In the day I can smile though I wanna die / Hold on, hold on / I can keep it together for a little while / and be strong, so strong / But when the sun goes down and I'm all alone / I haven't the strength to fight / That's when my tears give in to the night

Kim Wilde
Gardening is not something to get on your high horse about or be overwhelmed by. Either you enjoy it or you don't.

Kim Wilde
Do you think that you're beautiful?
Inside or outside? Mmmmm... outside I don't think about that too much because I realise that's all very superficial. I'm more concerned about inside, and inside I think I'm alright... I'm OK inside. I don't think I'm perfect and I don't call myself beautiful but I'm definitely not ugly inside. I've got friends who aren't that so called pleasant to look at but inside I think they're beautiful.

Kim Wilde
There is sadness and confusion in our hearts / And the world prepares to fight / as it tears itself apart, it isn't fair

Kim Wilde
I watch you sleep in the still of the night / You look so pretty when you dream / So many people just go through life / Holding back, they don't say what they mean / But it's easy for me / Since you came 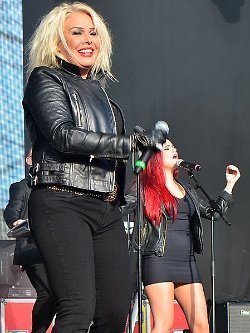 Creative Commons
Born: November 18, 1960 (age 59)
Bio: Kim Wilde is an English pop singer, author, DJ and television presenter who burst onto the music scene in 1981 with her debut single "Kids in America", which reached number two in the UK. In 1983, she received the Brit Award for Best British Female.
Known for:
Most used word:
beautiful