Hostility is expressed in a number of ways. One is laughter.

Kate Millett
Prostitution is really the only crime in the penal law where two people are doing a thing mutually agreed upon and yet only one, the female partner, is subject to arrest.

Kate Millett
To be a rebel is not to be a revolutionary. It is more often but a way of spinning one's wheels deeper in the sand.

Kate Millett
The whole bloody system is sick: the very notion of leadership, a balloon with a face painted upon it, elected and inflated by media's diabolic need to reduce ideas to personalities.

Kate Millett
No one should be adored, it's fundamentally immoral.

Kate Millett
Intercourse is an assertion of mastery, one that announces his own higher caste and proves it upon a victim who is expected to surrender, serve, and be satisfied.

Kate Millett
I believe there's a killer in all of us. I know there's one inside me. When you know the killer in you and you know also that you do not want to kill, you have to set yourself upon a course of learning. Not to kill that killer then, but to control it.

Kate Millett
Politics is repetition. It is not change. Change is something beyond what we call politics. Change is the essence politics is supposed to be the means to bring into being.

Kate Millett
The great mass of women throughout history have been confined to the cultural level of animal life in providing the male with sexual outlet and exercising the animal functions of reproduction and care of the young.

Kate Millett
For it is precisely because certain groups have no representation in a number of recognized political structures that their position tends to be so stable, their oppression so continuous.

Kate Millett
The worst part about prostitution is that you're obliged not to sell sex only, but your humanity. That's the worst part of it: that what you're selling is your human dignity. Not really so much in bed, but in accepting the agreement — in becoming a bought person.

Kate Millett
Perhaps nothing is so depressing an index of the inhumanity of the male-supremacist mentality as the fact that the more genial human traits are assigned to the underclass: affection, response to sympathy, kindness, cheerfulness.

Kate Millett
If only no one had told them I was mad. Then I wouldn't be.

Kate Millett
You may well ask how I expect to assert my privacy by resorting to the outrageous publicity of being one's actual self on paper. There's a possibility of it working if one chooses the terms, to wit: outshouting image-gimmick America through a quietly desperate search for self. 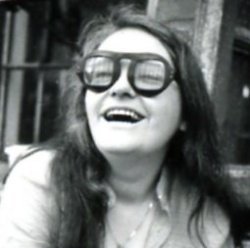