The state of Israel is a project of Jewish nationalism that is as legitimate as any other national project. But Israel as a state is not perfect and cannot be above criticism in democratic societies, including practical criticism.

Juan Cole
One of his charges is that I am accusing the Neoconservatives in the Pentagon of "dual loyalties." That is true, but not in the way Lake imagines. I believe that Doug Feith, for instance, has dual loyalties to the Israeli Likud Party and to the U. S. Republican Party. He thinks that their interests are completely congruent. And I also think that if he has to choose, he will put the interests of the Likud above the interests of the Republican Party.

Juan Cole
A group of Israeli rabbis has issued a call for the Sharon government to cease its policy of cavalierly allowing the killing innocent civilians in the [Palestinian] Occupied Territories in the course of its military operations against radical groups. They say such actions are inconsistent with the essence of the Jewish religion. Too right! Judaism has given us so much that is noble in ethical religion, and what the Likud is doing is an insult to that long and glorious tradition. Likud's real roots lie not in the Bible but in Zionist Revisionism of the Jabotinsky sort, which is frankly a kind of fascism. 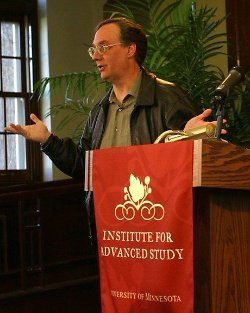 Creative Commons
Born: October 23, 1952 (age 69)
Bio: John Ricardo I. "Juan" Cole is an American academic and commentator on the modern Middle East and South Asia. He is Richard P. Mitchell Collegiate Professor of History at the University of Michigan.
Known for: