He'd…settled into a life of Guinness, sarcasm and late late nights, the kind of life that American academics think real Dubliners lead.

Joseph O'Connor
Love and freedom are such hideous words. So many cruelties have been done in their name.

Joseph O'Connor
Beliefs: Those things we hold to be true despite evidence to the contrary.

Joseph O'Connor
I feel these days like a very large flamingo. No matter what way I turn, there is always a very large bill.

Joseph O'Connor
Politics' the polite word for antediluvian prejudices, the rags put on by enmity and tribal resentment.

Joseph O'Connor
The most important thing I would learn in school was that almost everything I would learn in school would be utterly useless. When I was fifteen I knew the principal industries of the Ruhr Valley, the underlying causes of World War One and what Peig Sayers had for her dinner every day...What I wanted to know when I was fifteen was the best way to chat up girls. That is what I still want to know. 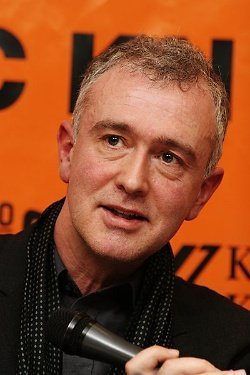 Creative Commons
Born: September 20, 1963 (age 56)
Bio: Joseph Victor O'Connor is an Irish novelist. He is known for his 2002 historical novel Star of the Sea. Before success as an author he was a journalist with the Sunday Tribune newspaper and Esquire magazine.
Known for: