John Wycliffe
Already a third and more of England is in the hands of the Pope. There cannot be two temporal sovereigns in one country; either Edward is King or Urban is king. We make our choice. We accept Edward of England and refute Urban of Rome.

John Wycliffe
I believe that in the end the truth will conquer.

John Wycliffe
Crown and cloth maken no priest, nor emperor's bishop with his words, but power that crist giveth; and thus by life have been priests known.

John Wycliffe
Visit those who are sick, or who are in trouble, especially those whom God has made needy by age, or by other sickness, as the feeble, the blind, and the lame who are in poverty. These you shall relieve with your goods after your power and after their need, for thus biddeth the Gospel.

John Wycliffe
I shall not die, but live; and again declare the evil deeds of the friars.

John Wycliffe
There was good reason for the silence of the Holy Spirit as to how, when, in what form Christ ordained the apostles, the reason being to show the indifferency of all forms of words.

John Wycliffe
I acknowledge that the sacrament of the altar is very God's body in form of bread, but it is in another manner God's body than it is in heaven. 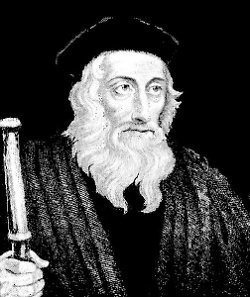