John Tyndall
Life is a wave, which in no two consecutive moments of its existence is composed of the same particles.

John Tyndall
Knowledge once gained casts a faint light beyond its own immediate boundaries.

John Tyndall
The term Physics, as made use of in the present Lecture, refers to that portion of natural science which lies midway between astronomy and chemistry. The former, indeed, is Physics applied to 'masses of enormous weight,' while the latter is Physics applied to atoms and molecules.

John Tyndall
I have thus led you to the outer rim of speculative science, for beyond the nebulae scientific thought has never ventured hitherto, and have tried to state that which I considered ought, in fairness, to be outspoken.

John Tyndall
The contemplation of Nature, and his own relation to her, produced in Faraday, a kind of spiritual exaltation which makes itself manifest here. His religious feeling and his philosophy could not be kept apart; there was an habitual overflow of the one into the other.
Of Michael Faraday
John Tyndall
It is one of the disadvantages of reading books about natural scenery that they fill the mind with pictures, often exaggerated, often distorted, often blurred, and, even when well drawn, injurious to the freshness of first impressions.

John Tyndall
It is by a kind of inspiration that we rise from the wise and sedulous contemplation of facts to the principles on which they depend.

John Tyndall
His soul was above all littleness and proof to all egotism.
Of Michael Faraday
John Tyndall
Bounded and conditioned by cooperant reason, imagination becomes the mightiest instrument of the physical discoverer.

John Tyndall
Taking him for all and all, I think it will be conceded that Michael Faraday was the greatest experimental philosopher the world has ever seen.
Of Michael Faraday
John Tyndall
Whether we see rightly or wrongly - whether our intellection be real or imaginary - it is of the utmost importance in science to aim at perfect clearness in the description of all that comes, or seems to come, within the range of the intellect.

John Tyndall
I do not think that it is the mission of this age, or of any other particular age, to lay down a system of education which shall hold good for all ages.

John Tyndall
We observe facts and store them up; imagination broods upon these memories, and by the aid of reason tries to discern their interdependence. The theoretic principle flashes, or slowly dawns upon the mind, and then the deductive faculty interposes to carry out the principle to its logical consequences.

John Tyndall
After the discoverer comes the teacher, whose function it is so to exalt and modify the experiments of his predecessor as to render them fit for public presentation.

John Tyndall
Experimental facts alone cannot satisfy the mind: we desire to know the cause of the fact; we search after the principle by the operation of which the phenomena are produced.

John Tyndall
Religious feeling is as much a verity as any other part of human consciousness; and against it, on the subjective side, the waves of science beat in vain.

John Tyndall
The aspects of Nature provoke in man the spirit of inquiry. As the eye is formed to see, and the ear to hear, so the human mind is formed to explore and understand the basis and relationship of natural phenomena.

John Tyndall
We cannot think of space as finite, for wherever in imagination we erect a boundary we are compelled to think of space as existing beyond that boundary. Thus by the incessant dissolution of limits we arrive at a more or less adequate idea of the infinity of space.

John Tyndall
It behooves us, who are examining the power and function of the imagination, to keep constantly before us the physical images which underlie our terms.

John Tyndall
Secured from the danger of putrefaction, it is amazing how, under the hands of a really able surgeon, the human, flesh and bones may be cut, torn, and crunched with impunity.

John Tyndall
Man never has been and he never will be satisfied with the operations and products of the understanding alone; hence physical science cannot cover all the demands of his nature.

John Tyndall
Truth is often of a dual character, taking the form of a magnet with two poles; and many of the differences which agitate the thinking part of mankind are to be traced to the exclusiveness with which partisan reasoners dwell upon one-half of the duality in forgetfulness of the other. 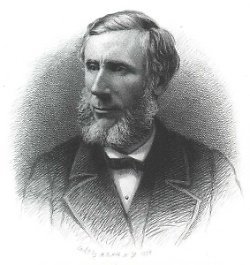 Creative Commons
Born: August 2, 1820
Died: December 4, 1893 (aged 73)
Bio: John Tyndall was a prominent 19th-century physicist. His initial scientific fame arose in the 1850s from his study of diamagnetism. Later he made discoveries in the realms of infrared radiation and the physical properties of air.
Known for:
Most used words:
command, man, faraday, scientific, truth