What? Men dodging this way for single bullets? What will you do when they open fire along the whole line? I am ashamed of you. They couldn't hit an elephant at this distance... 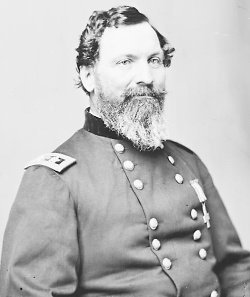 Creative Commons
Born: September 13, 1813
Died: May 9, 1864 (aged 50)
Bio: John Sedgwick was a teacher, a career military officer, and a Union Army general in the American Civil War. He was wounded three times at the Battle of Antietam while leading his division in an unsuccessful assault, causing him to miss the Battle of Fredericksburg.