John Newton
If our zeal is embittered by expressions of anger, invective, or scorn—we may think we are doing service of the cause of truth, when in reality we shall only bring it into discredit!

John Newton
By affliction prayer is quickened, for our prayers are very apt to grow languid and formal in a time of ease.

John Newton
So long as men are compassionate to such a degree that they cannot hear a fly struggling in a spider's web without emotion it can never be reasonably maintained that it is their natural impulse to wound and kill the dumb animals, or to butcher one another in what is called the field of honour.

John Newton
Whether men are pleased or not, we will, we must, worship the Lamb that was slain.

John Newton
Though troubles assail And dangers affright, Though friends should all fail And foes all unite; Yet one thing secures us, Whatever betide, The scripture assures us, The Lord will provide.

John Newton
How sweet the name of Jesus sounds
In a believer's ear!
It soothes his sorrows, heals his wounds,
And drives away his fear.

John Newton
If it were possible for me to alter any part of his plan, I could only spoil it.

John Newton
If we seem to get no good by attempting to draw near to Him, we may be sure we will get none by keeping away from Him.

John Newton
Not only the guilt, but the love of sin, and its dominion, are taken away, subdued by grace, and cordially renounced by the believing pardoned sinner.

John Newton
Glorious things of thee are spoken,
Zion, city of our God!

John Newton
There is many a thing which the world calls disappointment; but there is no such thing in the dictionary of faith. What to others are disappointments are to believers intimations of the will of God.

John Newton
To embrace what are called the Calvinistic doctrines was an infallible token of a humble mind.

John Newton
"What Thou wilt, when Thou wilt, how Thou wilt." I had rather speak these three sentences from my heart in my mother tongue than be master of all the languages in Europe.

John Newton
Zeal is that pure and heavenly flame,
The fire of love supplies ;
While that which often bears the name,
Is self in a disguise. True zeal is merciful and mild,
Can pity and forbear ;
The false is headstrong, fierce and wild,
And breathes revenge and war.


John Newton
I am persuaded that love and humility are the highest attainments in the school of Christ and the brightest evidences that He is indeed our Master.

John Newton
Many have puzzled themselves about the origin of evil. I am content to observe that there is evil, and that there is a way to escape from it, and with this I begin and end.

John Newton
I know not a better rule of reading the Scripture, than to read it through from beginning to end and when we have finished it once, to begin it again. We shall meet with many passages which we can make little improvement of, but not so many in the second reading as in the first, and fewer in the third than in the second: provided we pray to him who has the keys to open our understandings, and to anoint our eyes with His spiritual ointment.

John Newton
Of all people who engage in controversy, we, who are called Calvinists, are most expressly bound by our own principles to the exercise of gentleness and moderation.

John Newton
Show me what I have to do,
Every hour my strength renew;
Let me live a life of faith,
Let me die Thy people's death.

John Newton
As to myself, if I were not a Calvinist, I think I should have no more hope of success in preaching to men, than to horses or cows.

John Newton
'Twas grace that taught my heart to fear,
And grace my fears reliev'd;
How precious did that grace appear,
The hour I first believ'd!

John Newton
The midsummer sun shines but dim, The fields strive in vain to look gay; But when I am happy in Him December's as pleasant as May. 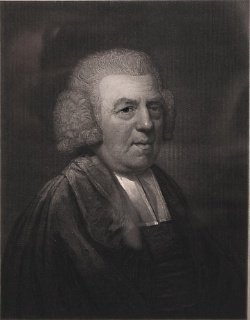 Creative Commons
Born: July 24, 1725
Died: December 21, 1807 (aged 82)
Bio: John Newton was a British slave trader who later became an abolitionist and converted to Christianity. He came to be a clergyman and songwriter. He is most famous for writing the lyrics to the historical hymn, Amazing Grace.
Most used words:
grace, god, hope, faith