The ability to get to the verge without getting into the war is the necessary art…We walked to the brink and we looked it in the face.

John Foster Dulles
You have to take chances for peace, just as you must take chances in war.... The ability to get to the verge without getting into the war is the necessary art. If you try to run away from it, if you are scared to go to the brink, you are lost.

John Foster Dulles
The United Nations represents not a final stage in the development of world order, but only a primitive stage. Therefore its primary task is to create the conditions which will make possible a more highly developed organization.

John Foster Dulles
We have reconfirmed the unity and firmness of our position, the position expressed in the Joint Communique of the four powers at Paris on December 14th. We do not accept any substitution of East Germans for the Soviet Union in its responsibilities toward Berlin and its obligations to us. We are resolved that our position in, and access to, West Berlin shall be preserved.

John Foster Dulles
In order to bring a nation to support the burdens of maintaining great military establishments, it is necessary to create an emotional state akin to war psychology. There must be the portrayal of an external menace. This involves the development to a high degree of the nation-hero, nation-villain ideology and the arousing of the population to a sense of sacrifice. Once these exist, we have gone a long way on the path to war.

John Foster Dulles
Mankind will never win lasting peace so long as men use their full resources only in tasks of war. While we are yet at peace, let us mobilize the potentialities, particularly the moral and spiritual potentialities, which we usually reserve for war.

John Foster Dulles
Local defense will always be important. But there is no local defense which alone will contain the mighty land power of the Communist world. Local defense must be reinforced by the further deterrent of massive retaliatory power.

John Foster Dulles
A peaceful world is a world in which differences are tolerated, and are not eliminated by violence. 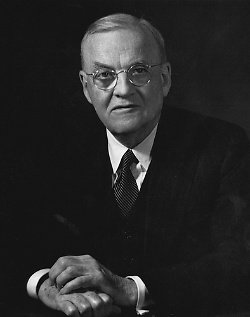 Creative Commons
Born: February 25, 1888
Died: May 24, 1959 (aged 71)
Bio: John Foster Dulles served as U.S. Secretary of State under Republican President Dwight D. Eisenhower from 1953 to 1959. He was a significant figure in the early Cold War era, advocating an aggressive stance against Communism throughout the world.
Known for: