You wish, or rather, have decided, to remove a splinter from someone? Very well, but do not go after it with a stick instead of a lancet for you will only drive it deeper. Rough speech and harsh gestures are the stick, while even-tempered instruction and patient reprimand are the lancet. 'Reprove, rebuke, exhort,' says the Apostle (II Tim. 4:2), not 'batter'.

John Climacus
The man who pets a lion may tame it, but the man who coddles the body makes it ravenous.

John Climacus
Do not make judgments, and you will travel no quicker road to the forgiveness of your sins. 'Judge not, so that you may not be judged' (Lk. 6:37).

John Climacus
The lover of silence draws close to God. He talks to Him in secret and God enlightens him.

John Climacus
Do not regard the feelings of a person who speaks to you about his neighbor disparagingly, but rather say to him: "Stop, brother! I fall into graver sins every day, so how can I criticize him? In this way you will achieve two things; you will heal yourself and your neighbor with one plaster. This is one of the shortest ways to the forgiveness of sins; I mean, not to judge. Judge not, and ye shall not be judged."

John Climacus
Do not be surprised if you fall every day and do not surrender. Stand your ground bravely and you may be sure that your guardian angel will respect your endurance. A fresh, warm wound is easier to heal than those that are old, neglected, and festering, and that need extensive treatment, surgery, bandaging and cauterization. Long neglect can render many of them incurable. However, all things are possible with God

John Climacus
When you are depressed, bear in mind the Lord's command to Peter to forgive a sinner seventy times seven (cf. Mt. 18:22). And you may be sure that He Who gave this command to another will Himself do very much more.

John Climacus
It happens, I do not know how, that most of the proud never really discover their true selves. They think they have conquered their passions and they find out how poor they really are only after they die.

John Climacus
When the soul betrays itself and loses the blessed and longed-for fervor, let it carefully investigate the reason for losing it. And let it arm itself with all its longing and zeal against whatever caused this. For the former fervor can return only through the same door through which it was lost.

John Climacus
Simplicity is an enduring habit within a soul that has grown impervious to evil thoughts.

John Climacus
When a man has found the Lord, he no longer has to use words when he is praying, for the Spirit Himself will intercede for him with groans that cannot be uttered.

John Climacus
Do not stop praying as long as, by God's grace, the fire and the water have not been exhausted, for it may happen that never again in your whole life will you have such a chance to ask for the forgiveness for your sins.

John Climacus
As fire does not give birth to snow, so those who seek honor here will not enjoy it in heaven... As those who climb a rotten ladder are in danger, so all honor, glory, and power are opposed to humility.

John Climacus
The slave of the belly ponders the menu with which to celebrate the feast. The servant of God, however, thinks of the graces that may enrich him.

John Climacus
God belongs to all free beings. He is the life of all, the salvation of all ~faithful and unfaithful, just and unjust, pious and impious, passionate and dispassionate, monks and laymen, wise and simple, healthy and sick, young and old just as the effusion of light, the sight of the sun, and the changes of the seasons are for all alike; 'for there is no respect of persons with God.'

John Climacus
A proud monk needs no demon. He has turned into one, an enemy to himself.

John Climacus
Fire and water do not mix, neither can you mix judgment of others with the desire to repent. If a man commits a sin before you at the very moment of his death, pass no judgment, because the judgment of God is hidden from men. It has happened that men have sinned greatly in the open but have done greater deeds in secret, so that those who would disparage them have been fooled, with smoke instead of sunlight in their eyes.

John Climacus
Those who submit to the Lord with simple heart will run the good race. If they keep their minds on a leash, they will not draw the wickedness of the demons onto themselves.

John Climacus
Ascend, my brothers, ascend eagerly. Let your hearts' resolve be to climb. Listen to the voice of the one who says: 'Come, let us go up to the mountain of the Lord, to the house of our God' (Isa. 2:3), Who makes our feet to be like the feet of the deer, 'Who sets us on the high places, that we may be triumphant on His road' (Hab. 3:19).

John Climacus
Confession is like a bridle that keeps the soul which reflects on it from committing sin, but anything left unconfessed we continue to do without fear as if in the dark. 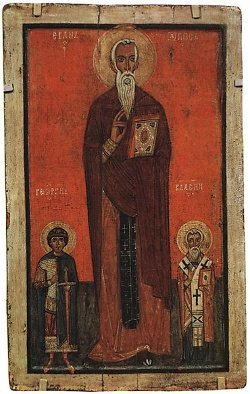 Creative Commons
Born: 579
Died: 649 (aged 70)
Bio: Saint John Climacus, also known as John of the Ladder, John Scholasticus and John Sinaites, was a 7th-century Christian monk at the monastery on Mount Sinai. He is revered as a saint by the Roman Catholic, Oriental Orthodox, Eastern Orthodox and Eastern Catholic churches.