Interlibrary loans are a wonder of the world and a glory of civilization.

Jo Walton
I've always thought fairies are like mushrooms, you trip over them when you're not thinking about them, but they're hard to spot when you're searching for them.

Jo Walton
I am reading The Lord of the Rings. I suddenly wanted to. I almost know it by heart, but I can still sink right into it. I know no other book that is so much like going on a journey. When I put it down to this, I feel as if I am also waiting with Pippin for the echoes of that stone down the well.

Jo Walton
It's amazing how large the things are that it's possible to overlook.

Jo Walton
There are some awful things in the world, it's true, but there are also some great books.

Jo Walton
If I were omnipotent and omnibenevolent I wouldn't be so damn ineffable.

Jo Walton
Avan was as religious as the next young dragon with his way to make in the world—which is to say that he held many traditional beliefs which he had never paused to examine, attended church because it would have seemed strange not to, rarely paid much attention when he was there, and found piety out of the pulpit thoroughly misplaced.

Jo Walton
You know, class is like magic. There's nothing there you can point to, it evaporates if you try to analyse it, but it's real and it affects how people behave and makes things happen.

Jo Walton
Marrying her to prove I do not subscribe to an outdated convention of class would be just as foolish as refusing to marry her because I did.

Jo Walton
Class is entirely intangible, and the way it affects things isn't subject to scientific analysis, and it's not supposed to be real but it's pervasive and powerful. See; just like magic.

Jo Walton
It was only now that they realized that there is nothing that can really be a preparation for death.

Jo Walton
All farms are much alike everywhere, and all wild places have their own beauty.

Jo Walton
The thing about Tolkien, about The Lord of the Rings, is that it's perfect. It's this whole world, this whole process of immersion, this journey. It's not, I'm pretty sure, actually true, but that makes it more amazing, that someone could make it all up. Reading it changes everything.

Jo Walton
I don't need to be a radical to think that who a dragon is counts more than birth or wealth, Selendra said, with what dignity she could.
Why, that's the very definition of a radical, he retorted.

Jo Walton
One of the things I've always liked about science fiction is the way it makes you think about things, and look at things from angles you'd never have thought about before.

Jo Walton
Magic isn't inherently evil. But it does seem to be terribly bad for people.

Jo Walton
I care more about the people in books than the people I see every day.

Jo Walton
If you love books enough, books will love you back.

Jo Walton
Libraries really are wonderful. They're better than bookshops, even. I mean bookshops make a profit on selling you books, but libraries just sit there lending you books quietly out of the goodness of their hearts.

Jo Walton
Tolkien understood about the things that happen after the end. Because this is after the end, this is all the Scouring of the Shire, this is figuring out how to live in the time that wasn't supposed to happen after the glorious last stand. I saved the world, or I think I did, and look, the world is still here, with sunsets and interlibrary loans. And it doesn't care about me any more than the Shire cared about Frodo.

Jo Walton
There is one law for rich and poor alike, which prevents them equally from stealing bread and sleeping under bridges.

Jo Walton
You can't do magic with books unless they're very special copies. 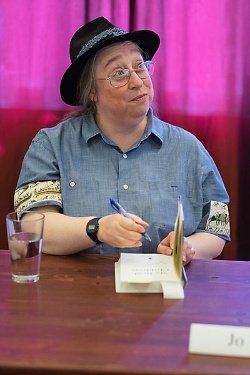