At any given moment in your life, you have the choice between love and fear. And that's a choice you make. You make the choice of how you react to events.

Jennifer Beals
All of us have an artist inside us. It's part of our DNA as human beings. We have all witnessed the power of the arts to deeply connect people, to open our minds to new ideas and express our innermost sacred selves. The imagination isn't just simply reserved for children. The imagination can be, for all of us, a very real gateway to joy, understanding, liberation and peace.

Jennifer Beals
Love is the greatest light, the brightest torch, and will always be the greatest instrument of change.

Jennifer Beals
It has been said, "History is written by the victors." I take this to mean we can make ourselves victorious by writing, and then rewriting our own stories. In a country and culture so dominated by media, by the manipulation of words and stories, telling the tales of people whose stories historically have not been told is a radical act and I believe an act that can change the world and help rewrite history.

Jennifer Beals
I'm interested when people will stand up for themselves. I'm always interested in that moment when someone decides it's not good enough, and even though it's painful, they're willing to make a change.

Jennifer Beals
It behooves all of us to have everyone experience their deepest, most beautiful, most profound and powerful self, because those people are more apt to give their gift to everyone else rather than shudder in fear.

Jennifer Beals
Love is large; love defies limits. People talk about the sanctity of love - love is by definition sacred. Not some love between some people, but all love between all people. 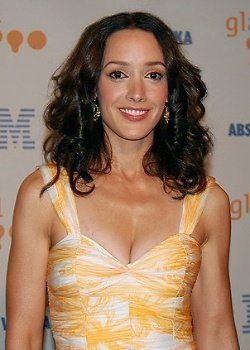 Creative Commons
Born: December 19, 1963 (age 57)
Bio: Jennifer Beals is an American actress and a former teen model. She is best known for her role as Alexandra "Alex" Owens in the 1983 romantic drama film Flashdance, and starred as Bette Porter on the Showtime drama series The L Word.
Known for: