Play doesn't have to be a frivolous thing. You may think of a Beethoven symphony as something serious, but it's still being played. I think Oscar Wilde said that life is too important to be taken seriously.

Jeff Bridges
You've got to take care of yourself on the path, not just when you cross the goal line, because don't forget, wherever you are, that's the goal line.

Jeff Bridges
Always maintain a joyful mind. Appreciate the struggles as opportunities to wake up.

Jeff Bridges
Hope's interesting, isn't it? I can't turn hope off, it's hopeless. 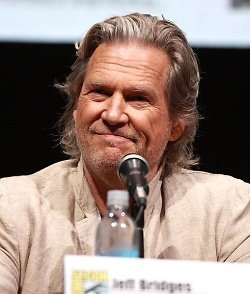 Creative Commons
Born: December 4, 1949 (age 70)
Bio: Jeffrey Leon "Jeff" Bridges is an American actor, singer, and producer. He comes from a prominent acting family, and appeared on the television series Sea Hunt, with his father, Lloyd Bridges and brother, Beau Bridges.
Known for: