I slept in a bed in a room with paintings on the walls, and planned another day just like this day. But one day, I know, it will be otherwise.

Jane Kenyon
Let it come, as it will, and don't be afraid. God does not leave us comfortless, so let evening come.

Jane Kenyon
Be a good steward of your gifts. Protect your time. Feed your inner life. Avoid too much noise. Read good books, have good sentences in your ears. Be by yourself as often as you can. Walk. Take the phone off the hook. Work regular hours.

Jane Kenyon
There's just no accounting for happiness, or the way it turns up like a prodigal who comes back to the dust at your feet having squandered a fortune far away.

Jane Kenyon
I divested myself of despair and fear when I came here. Now there is no more catching one's own eye in the mirror, there are no bad books, no plastic, no insurance premiums, and of cours eno illness. Contrition does not exist, nor gnashing of teeth. No one howls as the first clod of earth hits the casket. The poor we no longer have with us. Our calm hearts strike only the hour, and God, as promised, proves to be mercy clothed in light.

Jane Kenyon
Time to head home. I wait
until we're nearly out to the main road
to put him back on the leash, and he
— the designated optimist —
imagines to the end that he is free.


Jane Kenyon
I am the one whose love overcomes you, already with you when you think to call my name.

Jane Kenyon
I am food on the prisoner's plate...
the patient gardener
of the dry and weedy garden...
the stone step,
the latch, and the working hinge.


Jane Kenyon
Searching for God is the first thing and the last,
but in between such trouble, and such pain.

Jane Kenyon
If it's darkness
we're having,
let it be extravagant. 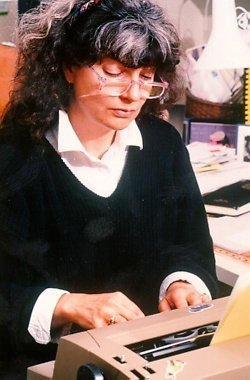 Wikipedia
Born: May 23, 1947
Died: April 22, 1995 (aged 47)
Bio: Jane Kenyon was an American poet and translator. Her work is often characterized as simple, spare, and emotionally resonant. Kenyon was the second wife of poet, editor, and critic Donald Hall who made her the subject of many of his poems.
Known for: