On the birth of his daughter:
Farewell [to the crown of Scotland]: It came with a lass, and it will pass with a lass. 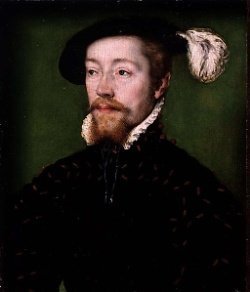 Creative Commons
Born: April 10, 1512
Died: December 14, 1542 (aged 30)
Bio: James V was King of Scots from 9 September 1513 until his death, which followed the Scottish defeat at the Battle of Solway Moss. His only surviving legitimate child, Mary, succeeded him when she was just six days old.