In the wars of the European powers in matters relating to themselves we have never taken any part, nor does it comport with our policy so to do.

James Monroe
A little flattery will support a man through great fatigue.

James Monroe
National honor is the national property of the highest value.

James Monroe
If we look to the history of other nations, ancient or modern, we find no example of a growth so rapid, so gigantic, of a people so prosperous and happy.

James Monroe
The American continents, by the free and independent condition which they have assumed and maintain, are henceforth not to be considered as subjects for future colonization by any European power.

James Monroe
It is only when the people become ignorant and corrupt, when they degenerate into a populace, that they are incapable of exercising their sovereignty.

James Monroe
How prone all human institutions have been to decay; how subject the best-formed and most wisely organized governments have been to lose their check and totally dissolve; how difficult it has been for mankind, in all ages and countries, to preserve their dearest rights and best privileges, impelled as it were by an irresistible fate of despotism.

James Monroe
Peace is the best time for improvement and preparation of every kind; it is in peace that our commerce flourishes most, that taxes are most easily paid, and that the revenue is most productive.

James Monroe
The Executive is charged officially in the Departments under it with the disbursement of the public money, and is responsible for the faithful application of it to the purposes for which it is raised. The Legislature is the watchful guardian over the public purse. It is its duty to see that the disbursement has been honestly made.

James Monroe
We must support our rights or lose our character, and with it, perhaps, our liberties.

James Monroe
The crime of ingratitude has not yet stained, and I trust never will stain, our national character. You are considered by them as not only having rendered important service in our own revolution, but as being, on a more extended scale, the friend of human rights, and able advocate of public liberty. To the welfare of Thomas Paine, the Americas are not, nor can they be, indifferent.

James Monroe
I enter on the trust to which I have been called by the suffrage of my fellow-citizens with my fervent prayers to the Almighty that He will be graciously pleased to continue to us that protect which He has already so conspicuously displayed in our favor.

James Monroe
What was the origin of our slave population? The evil commenced when we were in our Colonial state, but acts were passed by our Colonial Legislature, prohibiting the importation, of more slaves, into the Colony. These were rejected by the Crown. We declared our independence, and the prohibition of a further importation was among the first acts of state sovereignty. Virginia was the first state which instructed her delegates to declare the colonies independent. She braved all dangers. From Quebec to Boston, and from Boston to Savannah, Virginia shed the blood of her sons. No imputation then can be cast upon her in this matter. She did all that was in her power to do, to prevent the extension of slavery, and to mitigate its evils.

James Monroe
The movements of a great nation are connected in all their parts. If errors have been committed they ought to be corrected; if the policy is sound it ought to be supported.

James Monroe
The mention of Greece fills the mind with the most exalted sentiments and arouses in our bosoms the best feelings of which our nature is capable.

James Monroe
The Navy is the arm from which our Government will always derive most aid in support of our neutral rights. Every power engaged in war will know the strength of our naval force, the number of our ships of each class, their condition, and the promptitude with which we may bring them into service, and will pay due consideration to that argument.

James Monroe
The citizens of the United States cherish sentiments the most friendly in favor of liberty and happiness...beyond the Atlantic. In the wars of the European powers in matters relating to themselves we have never taken any part, nor does it comport with our policy to do so. It is only when our rights are invaded or seriously menaced that we resent injuries... 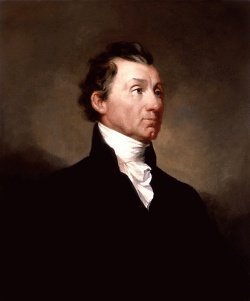