Sometimes I feel so nice, good God!
I jump back, I wanna kiss myself
I've got soul, and I'msuperbad.

James Brown
In our advanced technological age, most people deny the possibility of miracles.... Miracles don't happen, we are told, because they contravene the laws of nature and worse, they sound religious! Yet we live and move in a sea of miracle.

James Brown
When I'm on stage, I'm trying to do one thing: bring people joy. Just like church does. People don't go to church to find trouble, they go there to lose it.

James Brown
Sometimes you struggle so hard to feed your family one way, you forget to feed them the other way, with spiritual nourishment. Everybody needs that.

James Brown
We're tired of beating our head against the wall
And working for someone else
We're people, we're like the birds and the bees
But we'd rather die on our feet than keep living on our knees.
...
Say it loud! I'm black and I'm proud!

James Brown
I don't want nobody to give me nothing.
Open up the door, I'll get it myself.

James Brown
I'm the most sampled and stolen. What's mine is mine, and what's yours is mine, too … I got a song about that … But I'm never gonna release it. Don't want a war with the rappers. If it wasn't good, they wouldn't steal it.

James Brown
A colored is a very frightened-to-death Afro-American. A Negro is one that makes it in the system, and he wants to be white. A nigger, he's loud and boisterous, wants to be seen. Nobody likes a nigger. A black man has pride. He wants to build, he wants to make his race mean something. Wants to have a culture and art forms. And he's not prejudiced. I am a black American man. Now you go ahead and print it.

James Brown
Hair is the first thing. And teeth the second. Hair and teeth. A man got those two things he's got it all.

James Brown
To make it in life, you and your wife need to be in the same business. That has been my problem all along. My wives didn't know what I was doing. I would come back home from the road to a stranger. That's no good.

James Brown
It doesn't matter how you travel it, it's the same road. It doesn't get any easier when you get bigger, it gets harder. And it will kill you if you let it.

James Brown
This is an issue couples have to be straight on and agree on before they walk down that aisle; otherwise there is no way their marriage will survive.

James Brown
Don't terrorize. Organize. Don't burn. Give kids a chance to learn … The real answer to race problems in this country is education. Not burning and killing. Be ready. Be qualified. Own something. Be somebody. That's Black Power.

James Brown
Say It Loud: "I'm Black and I'm Proud."
Some people say we've got a lot of malice,
Some say it's a lot of nerve.
But I say we won't quit moving Until we get what we deserve.

James Brown
I would warn against anyone marrying a person with more than a ten-year age difference. It almost never works. It is difficult to find things to talk about, to use similar reference points, and to operate at the same speed of life. Another problem is that both sides usually don't want the same things at the same time.

James Brown
Once we—meaning Black performers—crossed the line, we could see our remnant shadows in the best of them! Elvis Presley, Mick Jagger, and Bruce Springsteen for openers, and then all the thousands who followed in their wake who emerged from the great encompassing Black Shadow of American culture.

James Brown
It's a man's world, but it wouldn't be nothing without a woman or a girl. 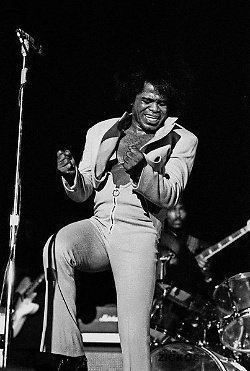 Creative Commons
Born: May 3, 1933
Died: December 25, 2006 (aged 73)
Bio: James Joseph Brown was an American singer, songwriter, record producer, dancer and bandleader. The founding father of funk music and a major figure of 20th century popular music and dance, he is often referred to as the "Godfather of Soul".
Known for: