Like it or not, people tend to buy paintings to match their drapes, couch or carpet. I know you want them to be so overwhelmed with your skills they can't resist hauling your art home. These three factors are what dictate most art sales.

Jack White
I have three dads: my biological father, God and Bob Dylan.

Jack White
Every time there's a list of the 100 greatest records of all time, all those albums were recorded in two days. Hardly any of them took a year, I'll tell you. In this day and age, I think it's important that people know that.

Jack White
I feel it, you felt it—we're all struggling with the trouble that this industry is in right now. And it's not about sales; it's about beauty and romance and a relationship to art that's turning invisible, and it's affecting people's perception of music. It's affecting whether they think of it as a viable art, because it's so fucking disposable. It's not about being modern or retro or a Luddite or being hopeful or pessimistic about the future; it's about clinging on to what makes sense of our lives, and what give our lives value, and what gives us a commonality and a feeling of belonging.

Jack White
Many days you will want to give up because of rejections and failures. Passion to be an artist will help you prevail where others fail.

Jack White
The only person who is hurt by jealousy is you... Eliminate that word from your life... it may not make you unsuccessful selling your art, but it will destroy your happiness. 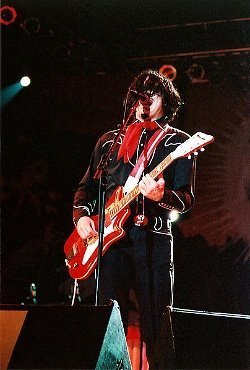 Creative Commons
Born: July 9, 1975 (age 44)
Bio: Jack White is an American musician, producer, and occasional actor. He is most well known as the frontman of the band The White Stripes, though he has been in several bands and collaborated with various artists.
Known for: