The concept of rotation led to geometrical exponential magnitudes, to the analysis of angles and of trigonometric functions, etc. I was delighted how thorough the analysis thus formed and extended, not only the often very complex and unsymmetric formulae which are fundamental in tidal theory, but also the technique of development parallels the concept.

Hermann Grassmann
From the imputation of confounding axioms with assumed concepts Euclid himself, however, is free. Euclid incorporated the former among his postulates while he separated the latter as common concepts—a proceeding which even on the part of his commentators was no longer understood, and likewise with modern mathematicians, unfortunately for science, has met with little imitation. As a matter of fact, the abstract methods of mathematical science know no axioms at all.

Hermann Grassmann
A work on tidal theory... led me to Lagrange's Mécanique analytique and thereby I returned to those ideas of analysis. All the developments in that work were transformed through the principles of the new analysis in such a simple way that the calculations often came out more than ten times shorter than in Lagrange's work.

Hermann Grassmann
The concept of centroid as sum led me to examine Möbius' Barycentrische Calcul, a work of which until then I knew only the title; and I was not little pleased to find here the same concept of the summation of points to which I had been led in the course of the development. This was the first, and... the only point of contact which my new system of analysis had with the one that was already known.

Hermann Grassmann
Geometry can in no way be viewed... as a brach of mathematics; instead, geometry relates to something already given in nature, namely, space. I also had realized that there must be a branch of mathematics which yields in a purely abstract way laws similar to geometry.

Hermann Grassmann
Mathematics is the science of the connection of magnitudes. Magnitude is anything that can be put equal or unequal to another thing. Two things are equal when in every assertion each may be replaced by the other.

Hermann Grassmann
I feel entitled to hope that I have found in this new analysis the only natural method according to which mathematics should be applied to nature, and according to which geometry may also be treated, whenever it leads to general and to fruitful results. 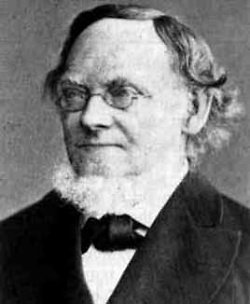 Creative Commons
Born: April 15, 1809
Died: September 26, 1877 (aged 68)
Bio: Hermann Günther Grassmann was a German polymath, known in his day as a linguist and now also as a mathematician. He was also a physicist, neohumanist, general scholar, and publisher. His mathematical work was little noted until he was in his sixties.
Known for: