The King found her [Anne of Cleves] so different from her picture…that…he swore they had brought him a Flanders mare.

Henry VIII of England
Alas, how can the poor souls live in concord when you preachers sow amongst them in your sermons debate and discord? They look to you for light and you bring them darkness. Amend these crimes, I exhort you, and set forth God's word truly, both by true preaching and giving a good example, or else, I, whom God has appointed his vicar and high minister here, will see these divisions extinct, and these enormities corrected...

Henry VIII of England
I see and hear daily that you of the Clergy preach one against another, teach one contrary to another, inveigh one against another without charity or discretion. Some be too stiff in their old mumpsimus, others be too busy and curious in their new sumpsimus. Thus all men almost be in variety and discord.

Henry VIII of England
Be not judges yourselves of your own fantastical opinions and vain expositions; and although you be permitted to read Holy Scriptures and to have the Word of God in your mother tongue, you must understand it is licensed so to do only to inform your conscience and inform your children and families, not to make Scripture a railing and taunting stock against priests and preachers. I am very sorry to know and hear how irreverently that precious jewel, the Word of God, is disputed, rimed, sung, and jangled in every alehouse and tavern, contrary to the true meaning and doctrine of the same.

Henry VIII of England
We be informed by our judges that we at no time stand so highly in our estate royal as in the time of Parliament, wherein we as head and you as members are conjoined and knit together into one body politic, so as whatsoever offence or injury (during that time) is offered to the meanest member of the House is to be judged as done against our person and the whole Court of Parliament.

Henry VIII of England
Well beloved subjects, wee thought that the clergie of our realme had been our subjectes wholy, but now we have well perceived that they bee but halfe our subjectes, yea, and scarce our subjectes: for all the prelates at their consecration make an othe to the pope, clene contrary to the the that they make to us, so that they seme to be his subjectes, and not ours.

When a thought is too weak to be expressed simply, it should be rejected.
Luc de Clapiers 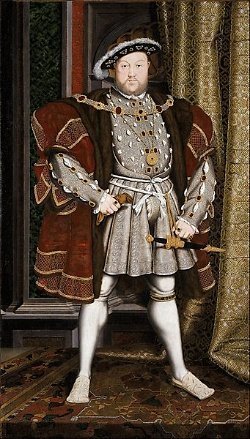 Creative Commons
Born: June 28, 1491
Died: January 28, 1547 (aged 55)
Bio: Henry VIII was King of England from 21 April 1509 until his death. He was Lord, and later assumed the Kingship, of Ireland, and continued the nominal claim by English monarchs to the Kingdom of France.

Elizabeth I of England
Daughter

Mary I of England
Daughter