My effort has been not only to put the Biblical incident in the original setting… but at the same time give the human touch to convey to my public the reverence and elevation these subjects impart to me.

Henry Ossawa Tanner
Many of the artists who have represented Negro life have seen only the comic, the ludicrous side of it, and have lacked sympathy with and appreciation for the warm, big heart that dwells within such a rough exterior.

Henry Ossawa Tanner
My effort has been to not only put the biblical incident in the original setting, but at the same time, to give the human touch which makes the whole world kin, and which ever remains the same.

Henry Ossawa Tanner
I was extremely timid and to be made to feel that I was not wanted, although in a place where I had every right to be, even months afterwards caused me sometimes weeks of pain. Every time any one of these disagreeable incidents came into my mind, my heart sank, and I was anew tortured by the thought of what I had endured, almost as much as the incident itself.

Henry Ossawa Tanner
Get it - get it better or get it worse. No middle ground of compromise.

Henry Ossawa Tanner
The physical characteristics of the child Jesus will always remain a point of discussion. No artist has ever produced a type, nor ever will, that has in it all that the varying minds of all time will acknowledge as complete. 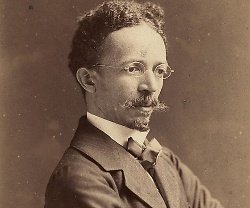 Creative Commons
Born: June 21, 1859
Died: May 25, 1937 (aged 77)
Bio: Henry Ossawa Tanner was an American artist and the first African-American painter to gain international acclaim. Tanner moved to Paris in 1891 to study, where he continued to live after being accepted in French artistic circles.
Known for: