It is impossible to devise a scientific experiment to describe the creation process, or even to ascertain whether such a process can take place. The Creator does not create at the whim of a scientist.

Henry M. Morris
Creation is not taking place now, so far as can be observed. Therefore, it was accomplished sometime in the past, if at all, and thus is inaccessible to the scientific method.

Henry M. Morris
If an evolutionary continuum existed, as the evolution model should predict, there would be no gaps, and thus it would be impossible to demark specific categories of life. Classification requires not only similarities, but differences and gaps as well, and these are much more amenable to the creation model.

Henry M. Morris
Evolution is the root of atheism, of communism, Nazism, behaviorism, racism, economic imperialism, militarism, libertinism, anarchism, and all manner of anti-Christian systems of belief and practice.

Henry M. Morris
It is precisely because Biblical revelation is absolutely authoritative and perspicuous that the scientific facts, rightly interpreted, will give the same testimony as that of Scripture. There is not the slightest possibility that the facts of science can contradict the Bible.

Henry M. Morris
The data must be explained by the evolutionist, but they are predicted by the creationist.

Henry M. Morris
The stars associated with the solar system, such as the planets and asteroids (and it should be remembered that the term star in Biblical usage applies to any heavenly body other than the sun and moon) would be particularly likely to be involved, in the view of the heavy concentration of angels, both bad and evil, around the planet Earth.

Henry M. Morris
The main reason for insisting on the universal Flood as a fact of history and as the primary vehicle for geological interpretation is that God's Word plainly teaches it! No geologic difficulties, real or imagined, can be allowed to take precedence over the clear statements and necessary inferences of Scripture.

Henry M. Morris
The only way we can determine the true age of the earth is for God to tell us what it is. And since He has told us, very plainly, in the Holy Scriptures that it is several thousand years in age, and no more, that ought to settle all basic questions of terrestrial chronology.

Henry M. Morris
It seems beyond all question that such complex systems as the DNA molecule could never arise by chance, no matter how big the universe or how long the time. The creation model faces this fact realistically and postulates a great Creator, by whom came life.

Henry M. Morris
Never are fossils of creatures found with incipient eyes, with half-way wings, with half-scales turning into feathers, with partially-evolved forelimbs, or with any other nascent or transitional characters. Yet there must have been innumerable individuals which possessed such features, if the neo-Darwinian model of evolutionary history is correct. 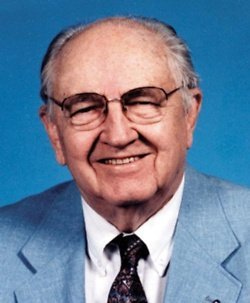 Wikipedia
Born: October 6, 1918
Died: February 25, 2006 (aged 87)
Bio: Henry Madison Morris was an American young Earth creationist, Christian apologist, and engineer. He was one of the founders of the Creation Research Society and the Institute for Creation Research. He is considered by many to be "the father of modern creation science.
Known for: