Henry L. Stimson
The chief lesson I have learned in a long life is that the only way you can make a man trustworthy is to trust him; and the surest way to make him untrustworthy is to distrust him.

Henry L. Stimson
History is often not what actually happened but what is recorded as such.

Henry L. Stimson
The decision to weigh Lieut. Gen. Patton's great services to his country, in World War I and World War II, from these shores to Casablanca and through Tunisia to triumph in Sicily, on the one hand, against an indefensible act on the other, was Gen. Eisenhower's.
As his report shows, General Eisenhower in making his decision also considered the value to our country of General Patton's aggressive, winning leadership in the bitter battles which are to come before final victory. I am confident that you will agree with me that Gen. Eisenhower's decision, under these difficult circumstances, was right and proper.

Henry L. Stimson
When the news first came that Japan had attacked us my first feeling was of relief that... a crisis had come in a way which would unite all our people. This continued to be my dominant feeling in spite of the news of catastrophes which quickly developed.

Henry L. Stimson
When all the arguments have been forgotten, this central fact will remain. The two nations fought a single war, and their quarrels were the quarrels of brothers.

Henry L. Stimson
The second generation Japanese can only be evacuated either as part of a total evacuation, giving access to the areas only by permits, or by frankly trying to put them out on the ground that their racial characteristics are such that we cannot understand or trust even the citizen Japanese. The latter is the fact but I am afraid it will make a tremendous hole in our constitutional system.

Henry L. Stimson
But I think the bomb instead constitutes merely a first step in a new control by man over the forces of nature too revolutionary and dangerous to fit into old concepts. 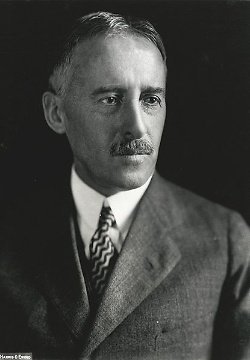 Creative Commons
Born: September 21, 1867
Died: October 20, 1950 (aged 83)
Bio: Henry Lewis Stimson was an American statesman, lawyer and Republican Party politician and spokesman on foreign policy. He served as Secretary of War under Republican William Howard Taft, and as Governor-General of the Philippines.
Known for: