I found it peculiar that those who wanted to take military action could — with 100 per cent certainty — know that the weapons existed and turn out to have zero knowledge of where they were.

Hans Blix
But in the Middle Ages people were convinced there were witches. They looked for them and they certainly found them.

Hans Blix
For some twenty years the window that opened at the end of the Cold War has been allowed to hang flapping in the wind. It is high time that the five nuclear-weapon states take seriously their commitment to negotiate toward nuclear disarmament.

Hans Blix
… there are people in this administration who say they don't care if the UN sinks under the East river, and other crude things…

Hans Blix
It was to do with information management. The intention was to dramatise it.

Hans Blix
I have my detractors in Washington. There are bastards who spread things around, of course, who planted nasty things in the media.

Hans Blix
Advertisers will advertise a refrigerator in terms they do not quite believe in but you expect governments to be more serious and have more credibility.

Hans Blix
There was a very consistent creation of a virtual reality, and eventually it collided with our old-fashioned, ordinary reality.

Hans Blix
It's true the Iraqis misbehaved and had no credibility but that doesn't necessarily mean that they were in the wrong. 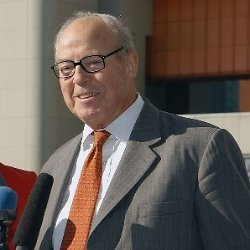 Creative Commons
Born: June 28, 1928 (age 93)
Bio: Hans Martin Blix is a Swedish diplomat and politician for the Liberal People's Party. He was Swedish Minister for Foreign Affairs and later became the head of the International Atomic Energy Agency.
Known for: