I'm a competitive person, but I have never understood people's competitiveness at the expense of their colleagues.

Geraldine Ferraro
Tonight, the daughter of an immigrant from Italy has been chosen to run for vice president in the new land my father came to love.

Geraldine Ferraro
It was not so very long ago that people thought that semiconductors were part-time orchestra leaders and microchips were very, very small snack foods.

Geraldine Ferraro
We've chosen the path to equality; don't let them turn us around.

Geraldine Ferraro
I am the first to admit that were I not a woman, I would not have been the vice-presidential nominee.

Geraldine Ferraro
Politics can be an ugly game, and in a national election the stakes get higher while the tactics get lower.

Geraldine Ferraro
Ronald Reagan can't resist an appeal from defense contractors down on their luck. They ask him to spare a dime for a cup of coffee, and he gives them seven thousand dollars for a coffee maker. There wasn't a dry eye in the White House when the forgotten wealthy asked for a handout.

Geraldine Ferraro
Such a strange thing. What was terrible for a healthy fetus has been wonderful at defeating the cancer cells.

Geraldine Ferraro
I stand before you to proclaim tonight: America is the land where dreams can come true for all of us.

Geraldine Ferraro
One reporter asked me about my father... But when I asked her what she knew about Ronald Reagan's father, she looked blank.

Geraldine Ferraro
The promise of our country is that the rules are fair. If you work hard and play by the rules, you can earn your share of America's blessings. Those are the beliefs I learned from my parents.

Geraldine Ferraro
Personal religious convictions have no place in political campaigns or in dictating public policy.

Geraldine Ferraro
A wise man once said, 'Every one of us is given the gift of life, and what a strange gift it is. If it is preserved jealously and selfishly, it impoverishes and saddens. But if it is spent for others, it enriches and beautifies.' My fellow Americans: We can debate policies and programs, but in the end what separates the two parties in this election campaign is whether we use the gift of life for others or only ourselves.

Geraldine Ferraro
Throwing Ronald Reagan out of office at the height of his popularity, with inflation and interest rates down, the economy moving and the country at peace, would have required God on the ticket and She was not available!

Geraldine Ferraro
You had to be tough to be a female member of Congress. 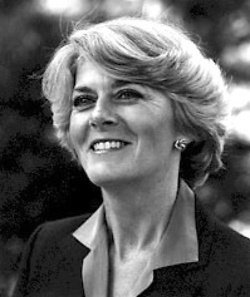