Sometimes we get so caught up in language, and this word and that word, that we lose site of the bigger problems in the world. At one time, the word Bitch simply meant female dog. Now, it has a negative meaning. Many negative words in one time and/or culture are meaningless in another. We've got to stop wasting time fighting over nonsense. I'm still waiting for aliens to come

George Clinton
Everybody's got a little light under the sun.

George Clinton
A chocolate city is no dream
It's my piece of the rock and I dig you, CC
God bless Chocolate City and its vanilla suburbs.


George Clinton
What is soul? I don't know! Soul is a hamhock in your cornflakes... Soul is a joint rolled in toilet paper. 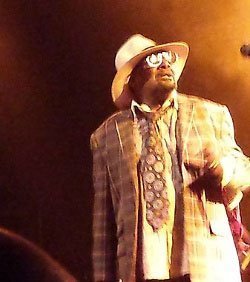 Creative Commons
Born: July 22, 1941 (age 80)
Bio: George Clinton is an American singer, songwriter, bandleader, and music producer. He was the principal architect of P-Funk, the mastermind of the bands Parliament and Funkadelic during the 1970s and early 1980s, and launched a solo career in 1981.
Known for: