There is an inescapable imperative about certain industrial developments. If there is not a safe road of advance, then a dangerous one will invariably be taken.

Fritz Leiber
Now is a bearable burden. What buckles the back is the added weight of the past's mistakes and the future's fears.

Fritz Leiber
Sometimes I wonder if our memories are as good as we think they are and if the whole past wasn't once entirely different from anything we remember, and we've forgotten that we forgot.

Fritz Leiber
Paul stared out at the randomly scattered, lonely stars and wondered why he had always so easily accepted that they represented order.

Fritz Leiber
The Devourers want to brood about their great service to the many universes — it is their claim that servile customers make the most obedient subjects for the gods.

Fritz Leiber
I abominate any organization that denies cats are people!

Fritz Leiber
'Things are different from what I thought. They're much worse.

Fritz Leiber
Devils may be nothing but beings intent on their purpose, which now happens to collide with yours.

Fritz Leiber
For that matter, where did I get off being critical of anyone?

Fritz Leiber
Not for the first time Richard reflected that this age's vaunted 'communications industry' had chiefly provided people and nations with the means of frightening to death and simultaneously boring to extinction themselves and each other.

Fritz Leiber
The gods spend the wealth the universe gathers, they scan the wonders and fling them to nothingness. That's why they're the gods! I told you they were devils.

Fritz Leiber
There are vampires and vampires, and not all of them suck blood.

Fritz Leiber
Thoughts are dangerous, he told himself, and thoughts against all science, all sanity, all civilized intelligence, are the most dangerous of all.

Fritz Leiber
A scientist ought to have a healthy disregard for coincidences.

Fritz Leiber
Then time seemed to stop, or rather to lose its directional urgency of movement; it became a place in the open where one stood rather than a low, narrow corridor down which one was hurried.

Fritz Leiber
What is superstition, but misguided, unobjective science? And when it comes down to that, is it to be wondered if people grasp at superstition in this rotten, hate-filled, half-doomed world of today? Lord knows, I'd welcome the blackest of black magic, if it could do anything to stave off the atom bomb.

Fritz Leiber
In the wake of a Big Change, cultures and individuals are transposed, it's true, yet in the main they continue much as they were, except for the usual scattering of unfortunate but statistically meaningless accidents.

Fritz Leiber
There was always something new to be seen in the unchanging night sky.

Fritz Leiber
What was life worth, anyway, if you had to sit around remembering not to mention this, that, and the other thing because someone else might be upset?

Fritz Leiber
Poets are wiser than anyone because they're the only people who have the guts to think and feel at the same time.

Fritz Leiber
Science has only increased the area of the unknown. And if there is a god, her name is Mystery.

Fritz Leiber
Of course, if you assume a big enough conspiracy, you can explain anything, including the cosmos itself.

Fritz Leiber
It's this mucking inefficiency and death of the cosmos — and don't tell me that isn't in the cards! — masquerading as benign omniscient authority.

Fritz Leiber
The greater the variety of intelligent life Don saw, the more he became sensitive to its presence.

Fritz Leiber
They've heard about space but they still don't believe in it. They haven't been out here to see for themselves that there isn't any giant elephant under the earth, holding it up, and a giant tortoise holding up the elephant. If I say planet and spaceship to them, they still think horoscope and flying saucer. 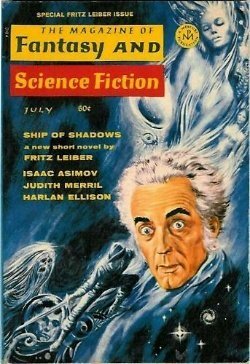