The United States has made a massive effort since the end of the Second World War to secure the dominance of its films in foreign markets - an achievement generally pushed home politically, by writing clauses into various treaties and aid packages.

Fredric Jameson
So is it always nationalist to resist US globalization? The US thinks it is, and wants you to agree; and, moreover, to consider US interests as being universal ones.

Fredric Jameson
If it is, in reality, capitalism that is the motor force behind the destructive forms of globalization, then it must be in their capacity to neutralize or transform this particular mode of exploitation that one can best test these various forms of resistance to the West.

Fredric Jameson
For when we talk about the spreading power and influence of globalization, arent we really referring to the spreading economic and military might of the US?

Fredric Jameson
In a world in which stylistic innovation is no longer possible, all that is left is to imitate dead styles... Contemporary or postmodernist art... will involve the necessary failure of art and the aesthetic, the failure of the new, the imprisonment in the past.

Fredric Jameson
Insofar as the theorist wins, therefore, by constructing an increasingly closed and terrifying machine, to that very degree he loses, since the critical capacity of his work is thereby paralysed, and the impulses of negation and revolt, not to speak of those of social transformation, are increasingly perceived as vain and trivial in the face of the model itself.

Fredric Jameson
It is safest to grasp the concept of the postmodern as an attempt to think the present historically in an age that has forgotten how to think historically in the first place.

Fredric Jameson
In most of the European countries - France stands out in its resistance to this particular form of American cultural imperialism - the national film industries were forced onto the defensive after the war by such binding agreements.

Fredric Jameson
And this fear that US models are replacing everything else now spills over from the sphere of culture into our two remaining categories: for this process is clearly, at one level, the result of economic domination - of local cultural industries closed down by American rivals.

Fredric Jameson
The standardization of world culture, with local popular or traditional forms driven out or dumbed down to make way for American television, American music, food, clothes and films, has been seen by many as the very heart of globalization.

Fredric Jameson
The visual is essentially pornographic, which is to say that it has its end in rapt, mindless fascination.

Fredric Jameson
Often, these downplay the power of cultural imperialism - in that sense, playing the game of US interests - by reassuring us that the global success of American mass culture is not as bad as all that. 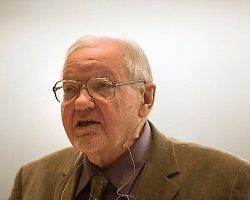 Born: April 14, 1934 (age 88)
Bio: Fredric Jameson is an American literary critic and Marxist political theorist. He is best known for his analysis of contemporary cultural trends. He once described postmodernism as the spatialization of culture under the pressure of organized capitalism.
Known for: