I'm not unmindful of man's seeming need for faith; I'm for anything that gets you through the night, be it prayer, tranquilizers, or a bottle of Jack Daniel's. But to me religion is a deeply personal thing in which man and God go it alone together, without the witch doctor in the middle.

Frank Sinatra
The big lesson in life, baby, is never be scared of anyone or anything.

Frank Sinatra
I could go on stage and make a pizza and they'd still come to see me.

Frank Sinatra
I would like to be remembered as a man who had a wonderful time living his life, and who had good friends, a fine family. I don't think I could ask for anything more than that, actually.

Frank Sinatra
If you possess something but you can't give it away, then you don't possess it... it possesses you.

Frank Sinatra
You can be the most artistically perfect performer in the world, but an audience is like a broad — if you're indifferent, Endsville.

Frank Sinatra
There are things about organized religion which I resent. Christ is revered as the Prince of Peace, but more blood has been shed in His name than any other figure in history. You show me one step forward in the name of religion and I'll show you a hundred retrogressions. Remember, they were men of God who destroyed the educational treasures at Alexandria, who perpetrated the Inquisition in Spain, who burned the witches at Salem. Over 25,000 organized religions flourish on this planet, but the followers of each think all the others are miserably misguided and probably evil as well.

Frank Sinatra
I'm supposed to have a Ph. D. on the subject of women. But the truth is I've flunked more often than not. I'm very fond of women; I admire them. But, like all men, I don't understand them.

Frank Sinatra
[On religion] I'm for anything that gets you through the night, be it prayer, benzedrine or a bottle of Jack Daniel's.

Frank Sinatra
Show me a guy who has feelings, and I'll show you a sucker.

Frank Sinatra
If you don't know the guy on the other side of the world, love him anyway because he's just like you. He has the same dreams, the same hopes and fears. It's one world, pal. We're all neighbors.

Frank Sinatra
For years I've nursed a secret desire to spend the Fourth of July in a double hammock with a swingin' redheaded broad … but I could never find me a double hammock.

Frank Sinatra
What I do with my life is of my own doing. I live it the best way I can.

Frank Sinatra
And now the end is near
And so I face the final curtain,
I'll state my case of which I'm certain.
I've lived a life that's full, I traveled each and ev'ry highway,
And more, much more than this. I did it my way.


Frank Sinatra
I'm for decency — period. I'm for anything and everything that bodes love and consideration for my fellow man. But when lip service to some mysterious deity permits bestiality on Wednesday and absolution on Sunday — cash me out.

Frank Sinatra
Strangers in the night, exchanging glances
Wond'ring in the night, what were the chances
We'd be sharing love before the night was through.


Frank Sinatra
I believe in you and me. I'm like Albert Schweitzer and Bertrand Russell and Albert Einstein in that I have a respect for life – in any form. I believe in nature, in the birds, the sea, the sky, in everything I can see or that there is real evidence for. If these things are what you mean by God, then I believe in God. But I don't believe in a personal God to whom I look for comfort or for a natural on the next roll of the dice.

Frank Sinatra
Whatever else has been said about me personally is unimportant. When I sing, I believe. I'm honest. 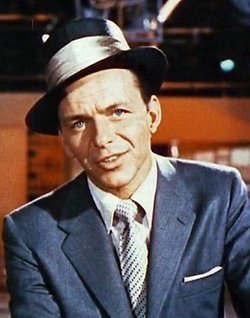 Creative Commons
Born: December 12, 1915
Died: December 12, 1915
Bio: Francis Albert "Frank" Sinatra was an American singer, actor, producer, and director, who was one of the most popular and influential musical artists of the 20th century. Sinatra's music has been considered timeless by many.
Known for:
Most used words:
night, god, life, love, man, religion