The ultimate notion of right is that which tends to the universal good; and when one's acting in a certain manner has this tendency, he has a right thus to act.

Francis Hutcheson
Whence this secret Chain between each Person and Mankind? How is my Interest connected with the most distant Parts of it?

Francis Hutcheson
That Action is best, which procures the greatest Happiness for the greatest Numbers; and that worst, which, in like manner, occasions Misery.

Francis Hutcheson
Many are really virtuous who cannot explain what virtue is... But the powers themselves in reality perform their several operations with sufficient constancy and uniformity in persons of good health whatever their opinions be about them...

Francis Hutcheson
Wisdom denotes the pursuing of the best Ends by the best Means.

Francis Hutcheson
All our Ideas, or the materials of our reasoning or judging, are received by some immediate Powers of Perception internal or external, which we may call Senses … Reasoning or Intellect seems to raise no new Species of Ideas, but to discover or discern the Relations of those received.

Francis Hutcheson
Men have been Laughed out of Faults which a Sermon could not reform.

Francis Hutcheson
Whoever voluntarily undertakes the necessary office of rearing and educating, obtains the parental power without generation. 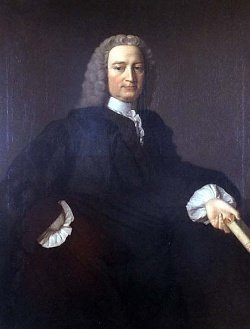 Creative Commons
Born: August 8, 1694
Died: August 8, 1746 (aged 52)
Bio: The Rev. Francis Hutcheson was an Ulster-Scots philosopher born in Ulster to a family of Scottish Presbyterians who became known as founding fathers of the Scottish Enlightenment.
Known for: