Errico Malatesta
The question may seem embarrassing, but it can be answered in a few words. For two people to live in peace they must both want peace; if one insists on using force to oblige the other to work for him and serve him, then the other, if he wishes to retain his dignity as a man and not be reduced to abject slavery, will be obliged in spite of his love of peace, to resist force with adequate means.

Errico Malatesta
Anarchists generally make use if the word "State" to mean all the collection of institutions, political, legislative, judicial, military, financial, etc., by means of which management of their own affairs, the guidance of their personal conduct, and the care of ensuring their own safety are taken from the people and confided to certain individuals, and these, whether by usurpation or delegation, are invested with the right to make laws over and for all, and to constrain the public to respect them, making use of the collective force of the community to this end.

Errico Malatesta
Anarchy is a word that comes from the Greek, and signifies, strictly speaking, "without government": the state of a people without any constituted authority.
Before such an organization had begun to be considered possible and desirable by a whole class of thinkers, so as to be taken as the aim of a movement (which has now become one of the most important factors in modern social warfare), the word anarchy was used universally in the sense of disorder and confusion, and it is still adopted in that sense by the ignorant and by adversaries interested in distorting the truth.

Errico Malatesta
While preaching against every kind of government, and demanding complete freedom, we must support all struggles for partial freedom, because we are convinced that one learns through struggle,

Errico Malatesta
The only limit to the oppression of government is the power with which the people show themselves capable of opposing it.

Errico Malatesta
Organisation, far from creating authority, is the only cure for it and the only means whereby each of us will get used to taking an active and conscious part in collective work, and cease being passive instruments in the hands of leaders.

Errico Malatesta
By anarchist spirit I mean that deeply human sentiment, which aims at the good of all, freedom and justice for all, solidarity and love among the people; which is not an exclusive characteristic only of self-declared anarchists, but inspires all people who have a generous heart and an open mind...

Errico Malatesta
We are neither for a majority nor for a minority government; neither for democracy not for dictatorship.
We are for the abolition of the gendarme. We are for the freedom of all and for free agreement, which will be there for all when no one has the means to force others, and all are involved in the good running of society. We are for anarchy.

Errico Malatesta
Experience through freedom is the only means to arrive at the truth and the best solutions; and there is no freedom if there is not the freedom to be wrong.

Errico Malatesta
We follow ideas and not men, and rebel against this habit of embodying a principle in a man.

Errico Malatesta
For anarchy to succeed or simply to advance towards its success it must be conceived not only as a lighthouse which illuminates and attracts, but as something possible and attainable, not in centuries to come, but in a relatively short time and without relying on miracles...

Errico Malatesta
Theoretically "democracy" means popular government; government by all for everybody by the efforts of all. In a democracy the people must be able to say what they want, to nominate the executors of their wishes, to monitor their performance and remove them when they see fit.
Naturally this presumes that all the individuals that make up a people are able to form an opinion and express it on all the subjects that interest them. It implies that everyone is politically and economically independent and therefore no-one, to live, would be obliged to submit to the will of others.

The fear of burglars is not only the fear of being robbed, but also the fear of a sudden and unexpected clutch out of the darkness.
Elias Canetti 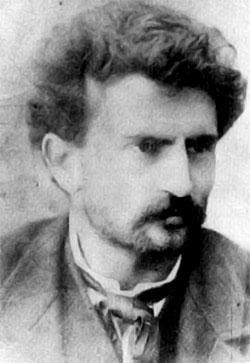 Creative Commons
Born: December 14, 1853
Died: July 22, 1932 (aged 78)
Bio: Errico Malatesta was an Italian anarchist. He spent much of his life exiled from Italy and in total spent more than ten years in prison. Malatesta wrote and edited a number of radical newspapers and was also a friend of Mikhail Bakunin.
Known for: