When I went to Brooklyn in 1948 Jackie Robinson was at the height of his brilliant career.

Ernie Harwell
Baseball is a spirited race of man against man, reflex against reflex. A game of inches. Every skill is measured. Every heroic, every failing is seen and cheered, or booed. And then becomes a statistic.

Ernie Harwell
Baseball is a tongue-tied kid from Georgia growing up to be an announcer and praising the Lord for showing him the way to Cooperstown. This is a game for America. Still a game for America, this baseball!

Ernie Harwell
Baseball is the president tossing out the first ball of the season. And a scrubby schoolboy playing catch with his dad on a Mississippi farm.

Ernie Harwell
I'd like to be remembered as someone who showed up for the job. I consider myself a worker.

Ernie Harwell
In baseball, democracy shines its clearest. The only race that matters is the race to the bag. The creed is the rule book. And color, merely something to distinguish one team's uniform from another's.

Ernie Harwell
I love what I do. If I had my time over again, I'd probably do it for nothing.

Ernie Harwell
But most of all, I'm a part of you people out there who have listened to me, because especially you people in Michigan, you Tiger fans, you've given me so much warmth, so much affection and so much love.

Ernie Harwell
I had a job to do, and I did it all these years to the best of my ability. That's what I'd like to leave behind as I finish my final game in Toronto.

Ernie Harwell
A tall, thin old man waving a scorecard from the corner of his dugout. That's baseball.

Ernie Harwell
Baseball is a rookie, his experience no bigger than the lump in his throat as he begins fulfillment of his dream.

Ernie Harwell
There's a man in Mobile who remembers that Honus Wagner hit a triple in Pittsburgh 46 years ago. That's baseball.

Ernie Harwell
With the Giants I broadcast the debut of Hall of Famer Willie Mays.

Ernie Harwell
If I walked back into the booth in the year 2025, I don't think it would have changed much. I think baseball would be played and managed pretty much the same as it is today. It's a great survivor.

Ernie Harwell
I praise the Lord here today. I know that all my talent and all my ability comes from him, and without him I'm nothing and I thank him for his great blessing. 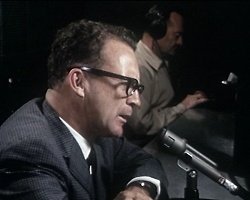