Why is it that, as a culture, we are more comfortable seeing two men holding guns than holding hands?

Ernest J. Gaines
Question everything. Every stripe, every star, every word spoken. Everything.

Ernest J. Gaines
We wait till now? Now, when we're old men, we get to be brave?

Ernest J. Gaines
A myth is an old lie that people believe in. White people believe that they're better than anyone else on earth - and that's a myth.

Ernest J. Gaines
I like the sound of people's voices, and I think what a man says can very well tell what he's thinking, whether he's lying or not.

Ernest J. Gaines
King is probably one of three men of this century that I'll call heroic. A fantastic man as far as I'm concerned, for all that he did.

Ernest J. Gaines
All writers write about the past, and I try to make it come alive so you can see what happened.

Ernest J. Gaines
This earth is yours and don't let that man out there take it from you. It's yours because your people's bones lays in it; it's yours because their sweat and their blood done drenched this earth.

Ernest J. Gaines
And I thought to myself, What am I doing? Am I reaching them at all? They are acting exactly as the old men did earlier. They are fifty years younger, maybe more, but doing the same thing those old men did who never attended school a day in their lives. Is it just a vicious circle? Am I doing anything?

Ernest J. Gaines
I want you to show them the difference between what they think you are and what you can be.

Ernest J. Gaines
How do people come up with a date and a time to take life from another man? Who made them God?

Ernest J. Gaines
I have learned as much about writing about my people by listening to blues and jazz and spirituals as I have by reading novels.

Ernest J. Gaines
Why is it that, as a culture, we are more comfortable seeing two men holding guns than holding hands?- Check your egos at the door.

Ernest J. Gaines
"You going back," she said. "You ain't going to run away from this, Grant."

Ernest J. Gaines
I think I'm a very religious person. I think I believe in God as much as any man does. I don't only believe in God, I know there's God.

Ernest J. Gaines
I was paralyzed. Paralyzed. Yes, I had a mouth, but I didn't have a voice. I had legs, but I couldn't move. I had arms, but I couldn't lift them up to you. It took a man to do these things, and I wasn't a man. I was just some other brutish animal who could cheat, steal, rob, kill—but not stand.... They had branded that in us from the time of slavery.

Ernest J. Gaines
Now, about that mulatto teacher and me. There was no love there for each other. There was not even respect. We were enemies if anything. He hated me, and I knew it, and he knew I knew it. I didn't like him, but I needed him, needed him to tell me something that none of the others could or would.

Ernest J. Gaines
We looked at each other, and I could see in those big reddened eyes that he was not going to scream. He was full of anger - and who could blame him? - but he was no fool. He needed me, and he wanted me here, if only to insult me. 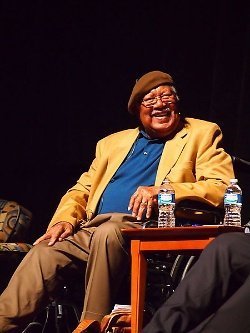 Creative Commons
Born: January 15, 1933
Died: November 5, 2019 (aged 86)
Bio: Ernest James Gaines was an African-American author whose works have been taught in college classrooms and translated into many languages, including French, Spanish, German, Russian and Chinese. Four of his works have been made into television movies.
Known for:
Most used words:
men, god, peers, work, change, people, keep, needed