If you have something that you don't want anyone to know, maybe you shouldn't be doing it in the first place.

Eric Schmidt
The Internet is the first thing that humanity has built that humanity doesn't understand, the largest experiment in anarchy that we have ever had.

Eric Schmidt
If you have a child, you'll notice they'll have two states, asleep or online.

Eric Schmidt
Ultimately, in the Internet, openness has always won. I cannot imagine that the current competitive environment would reverse that.

Eric Schmidt
Playing catch-up with the competition can only ever help you make incremental gains. It will never help you create something new.

Eric Schmidt
Technology will move faster than governments, so don't legislate before you understand the consequences...

Eric Schmidt
We have always been the leader in security and in encryption. Our systems are far more secure and encrypted than anyone else, including Apple. They're catching up, which is great.

Eric Schmidt
Ultimately, application vendors are driven by volume, and volume is favored by the open approach Google is taking. There are so many manufacturers working so hard to distribute Android phones globally that whether you like [Android 4.0] or not … you will want to develop for that platform, and perhaps even first.

Eric Schmidt
Everyone understands climate change is occurring and the people who oppose it are really hurting our children and our grandchildren and making the world a much worse place. And so we should not be aligned with such people — they're just, they're just literally lying. 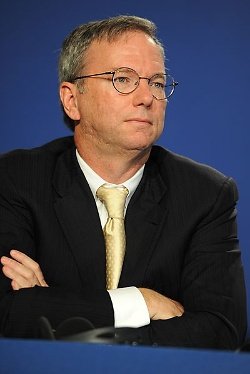 Creative Commons
Born: April 27, 1955 (age 65)
Bio: Eric Emerson Schmidt is an American software engineer, businessman, as well as the executive chairman of Alphabet Inc. In 2013, Forbes ranked Schmidt as the 138th-richest person in the world, with an estimated wealth of $11 billion.
Known for: