Difficult for actors to extemporise in nineteenth-century English. Except for Robert Hardy and Elizabeth Spriggs, who speak that way anyway.

Emma Thompson
P. S. Managed to avoid the hoyden Emily Thompkinson, who has purloined my creation and added things of her own. Nefarious Creature!

Emma Thompson
There is a painful difference between the expectation of an unpleasant event and its final certainty.

Emma Thompson
[The gym is] really depressing—so I just trot in an elderly fashion around the cricket pitch for 20 minutes.

Emma Thompson
Got up this morning and could not find my glasses. Finally had to seek assistance. Kate [Winslet] found them inside a flower arrangement.

Emma Thompson
Lindsay Doran goes round the table and introduces everyone - making it clear that I am present in the capacity of writer rather than actress, therefore no one has to be too nice to me.

Emma Thompson
Profound thanks to Columbia Pictures and the lovely forms of Lisa Henson, Gary Wiggan, and Mark Canter for hiring a first-time writer; to James Shamus for his rare intelligence; to Sidney Pollack for asking all the right questions, like 'Why couldn't these women go out and get a job?' Why, indeed. To the cast and crew, for being impeccable. To my friend and my teacher, Lindsay Doran, for being the single most frustrating reason why I can't claim all the credit for myself. And finally, I would like with your permission to dedicate this Oscar to our director, Ang Lee. Ang, wherever you are, this is for you.

Emma Thompson
Thank you very much. Good Heavens. Um, I can't thank you enough, Hollywood Foreign Press, for honouring me in this capacity. I don't wish to burden you with my debts, which are heavy and numerous but, um, I think that everybody involved in the making of this film knows that we owe all our pride and all our joy to the genius of Jane Austen. And, um, it occurred to me to wonder how she would react to an evening like this... [Puts down statue on stage, reads paper] This is what I came up with

Emma Thompson
Before I came, I went to visit Jane Austen's grave in Winchester Cathedral to pay my respects, you know, and tell her about the grosses. [Laughter] I don't know how she would react to an evening like this, but I do hope — I do hope she knows how big she is in Uruguay.

Emma Thompson
I don't really know how to thank the Academy for this. And if I try we'll be here till Christmas. So I better get on... 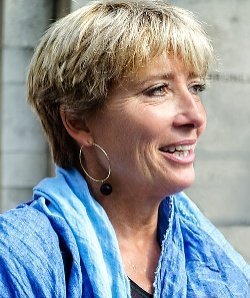 Creative Commons
Born: April 15, 1959 (age 62)
Bio: Emma Thompson is a British actress, comedian, and writer. She is known for her portrayals of reticent women, often in period dramas and literary adaptations, and playing haughty or matronly characters with a sense of irony.
Known for: