Emma Donoghue
Vitamins are medicine for not getting sick and going back to Heaven yet.

Emma Donoghue
"Are stories true?"
"Which ones?"
"The mermaid mother and Hansel and Gretel and all them."
"Well," says Ma, "not literally."
"What's—"
"They're magic, they're not about real people walking around today."
"So they're fake?"
"No, no. Stories are a different kind of true."


Emma Donoghue
When I tell her what I'm thinking and she tells me what she's thinking, our each ideas jumping into the other's head, like coulouring blue crayon on top of yellow that makes green.

Emma Donoghue
Me and Ma have a deal, we're going to try everything one time so we know what we like.

Emma Donoghue
Writing stories is my way of scratching that itch: my escape from the claustrophobia of individuality. It lets me, at least for a while, live more than one life, walk more than one path. Reading, of course, can do the same.

Emma Donoghue
If I was made of cake I'd eat myself before somebody else could.

Emma Donoghue
I think about Old Nick carrying me into the truck, I'm dizzy like I'm going to fall down. "Scared is what you're feeling," says Ma, "but brave is what you're doing." "Huh?" "Scaredybrave." "Scave." Word sandwiches always make her laugh but I wasn't being funny.

Emma Donoghue
It's called mind over matter. If we don't mind, it doesn't matter.

Emma Donoghue
In the world I notice persons are nearly always stressed and have no time...I don't know how persons with jobs do the jobs and all the living as well...I guess the time gets spread very thin like butter all over the world, the roads and houses and playgrounds and stores, so there's only a little smear of time on each place, then everyone has to hurry on to the next bit.

Emma Donoghue
I look back one more time. It's like a crater, a hole where something happened.

Emma Donoghue
I've always been religiously inclined, but it doesn't come up in most of my books.

Emma Donoghue
The sound of the pages turning was the sound of magic. The dry liquid feel of paper under fingertips was what magic felt like.

Emma Donoghue
For all the books in his possession, he still failed to read the stories written plain as day in the faces of the people around him.

Emma Donoghue
It's all real in Outside, everything there is, because I saw an airplane in the blue between the clouds. Ma and me can't go there because we don't know the secret code, but it's real all the same. Before I didn't know to be mad that we can't open Door, my head was too small to have Outside in it.

Emma Donoghue
The world is always changing brightness and hotness and soundness, I never know how it's going to be the next minute.

Emma Donoghue
We're standing on the deck that's all wooden like the deck of a ship. There's fuzz on it, little bundles. Grandma says it's some kind of pollen from a tree. "Which one?" I'm staring up at all the differents. "Can't help you there, I'm afraid." In Room we knowed what everything was called but in the world there's so much, persons don't even know the names.

Emma Donoghue
It's called mind over matter. If we don't mind, it doesn't matter. When a bit of me hurts, I always mind.

Emma Donoghue
This is a bad story. Sorry. I'm really sorry. I shouldn't have told you. No, you should, I say. But— I don't want there to be bad stories and me not know them.

Emma Donoghue
We used to call it her Cinderella complex, because often when she had agreed to go out in the evening she would be seized by panic and announce that she had nothing to wear.

Emma Donoghue
Nowadays, 'invisibility' was supposed to be the big problem, but the way I saw it was, all that mattered was to be visible to yourself.

Emma Donoghue
When I was four I thought everything in TV was just TV, then I was five and Ma unlied about lots of it being pictures of real and Outside being totally real. Now I'm in Outside but it turns out lots of it isn't real at all.

Emma Donoghue
Real loneliness is having no one to miss. Think yourself lucky you've known something worth missing.

Emma Donoghue
Ma's still nodding. "You're the one who matters, though. Just you." I shake my head till it's wobbling because there's no just me. 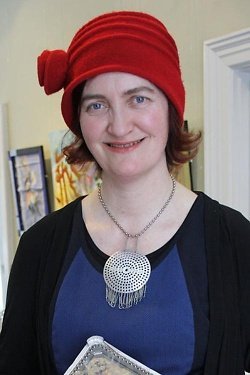