America represents herself as a Christian nation.... They profess to be a friend and defenders of all peace-loving and freedom-loving people. The only people we really see that they want to be friends of are themselves and their kind. They are really sincere when they say that they are freedom-loving people. Above all, the White man the world over wants to be free to rule and dominate the aboriginal people.

Elijah Muhammad
Accept your place in the sun as it was originally before the creation of this world... The black man is the first and last, maker and owner of the universe.

Elijah Muhammad
Love of self comes first. The one who loves everybody is the one who does not love anyone.

Elijah Muhammad
Not knowing "self" or anyone else, they [black people] are prey in the hands of the white race, the world's archdeceivers (the real devils in person).

Elijah Muhammad
When the first man created Himself, He was the light of the circle. Then He willed the sun into being It was 6 trillion years between the making of the sun and the creation of man.

Elijah Muhammad
But let them tell you what type of an Apostle or prophet God promised them. Was it a man from some of the enemy colleges and universities with an arm full of degrees coming from these institutions of learning of the enemy? Let them read their scriptures and see what type of man God promised to choose for a last messenger. How many of the prophets in the past were educated men of the civilization in which they were born before the call of God?

Elijah Muhammad
We must realize the difference between integration and separation. To integrate with evil is to be destroyed with evil. What we want—indeed justice for us—is to be set apart. We want and must insist upon an area in this land that we can call our own, somewhere we can hold our heads with pride and dignity without the continuous harassments and indignities of our oppressors.

Elijah Muhammad
The church has failed you. Christianity has failed you. The government of America has failed you. You have not received justice from any quarter. As prophesied, you, my fellow Black men, are as sheep among wolves and, as is to be expected, every wolf is taking a bite at you.

Elijah Muhammad
One of the gravest handicaps among the so-called Negroes is that there is no love for self, nor love for his or her own kind. This not having love for self is the root cause of hate.... How can you be loved if you have not love for self and your own nation and dislike being a member of your own?... What nation will trust your love and membership? 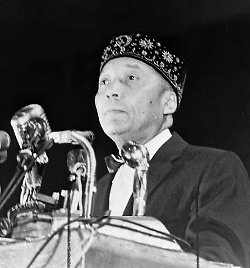 Creative Commons
Born: October 7, 1897
Died: February 25, 1975 (aged 77)
Bio: Elijah Muhammad was an African-American religious leader, who led the Nation of Islam from 1934 until his death in 1975. He was a mentor to Malcolm X, Louis Farrakhan, Muhammad Ali, as well as his own son, Warith Deen Mohammed.
Known for: