The most important question we have to deal with, is a combination of population control and the control of our environment — how to utilize the world in as effective a way as we can for the future of mankind.

David Packard
Marketing is far too important to be left only to the marketing department!.

David Packard
Set out to build a company and make a contribution, not an empire and a fortune.

David Packard
The greatest success goes to the person who is not afraid to fail in front of even the largest audience.

David Packard
Wells Fargo sent a retired engineer to visit us. I spent a full afternoon with him and I have remembered ever since some advice he gave me. He said that more businesses die of indigestion than starvation. I have observed the truth of that advice many times since then.

David Packard
The best company management is one that combines a sense of corporate greatness and destiny, with empathy for - and fidelity to - the average employee.

David Packard
Flextime is the essence of respect for and trust in people. 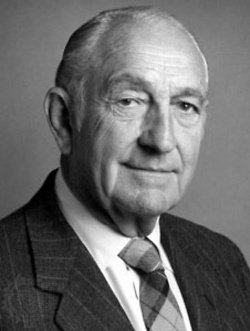 Wikipedia
Born: September 7, 1913
Died: March 26, 1996 (aged 82)
Bio: David Packard was an electrical engineer and co-founder, with William Hewlett, of Hewlett-Packard, serving as president, CEO, and Chairman of the Board. He served as U.S. Deputy Secretary of Defense from 1969 to 1971 during the Nixon administration.
Known for: