Knowledge itself is a neutral tool that can be used for good or evil. Wisdom, in contrast, always directs us toward happiness. The task of education must be to stimulate and unleash the wisdom that lies dormant in the lives of all young people. This is not a forced process, like pressing something into a preformed mold, but rather drawing out the potential which exists within.

Daisaku Ikeda
What may look like a small act of courage is courage nevertheless. The important thing is to be willing to take a step forward.

Daisaku Ikeda
Ideal love is fostered only between two sincere, mature and independent people. Real love is not two people clinging to each other; it can only be fostered between two strong people secure in their individuality.

Daisaku Ikeda
What is defeat in life? It is not merely making a mistake; defeat means giving up on yourself in the midst of difficulty. What is true success in life? True success means winning in your battle with yourself. Those who persist in the pursuit of their dreams, no matter what the hurdles, are winners in life, for they have won over their weaknesses.

Daisaku Ikeda
People can only live fully by helping others to live. When you give life to friends you truly live. Cultures can only realize their further richness by honoring other traditions. And only by respecting natural life can humanity continue to exist.

Daisaku Ikeda
Bravely overcoming one small fear gives you the courage to take on the next.

Daisaku Ikeda
The profound unity of subjective existence and objective environment leads naturally to the idea that the life-force of one human being can affect other living beings and even the fundamental being of humankind as a whole. Furthermore, the minds of humankind fuse into one and exert a continuous influence, both physical and spiritual, on other living beings and on the whole of nature.

Daisaku Ikeda
Do something! Start something! As you make consistent efforts, you will begin to see your goals come into focus. You will discover your mission--the one only you can fulfill.

Daisaku Ikeda
You will pass through storms and heavy rains, and at times you will suffer defeat. The essence of the creative life, however, is not to give up in the face of defeat but to follow the rainbow that exists within your heart.

Daisaku Ikeda
Anyone who has ever made a resolution discovers that the strength of their determination fades with time. The important thing is not that your resolve never wavers, but that you don't get down on yourself when it does and throw in the towel.

Daisaku Ikeda
If you summon your courage to challenge something, you'll never be left with regret. How sad it is to spend your life wishing, If only I'd had a little more courage. Whatever the outcome may be, the important thing is to step forward on the path that you believe is right.

Daisaku Ikeda
Instead of engaging in cutthroat competition, we should strive to create value. In economic terms, this means a transition from a consumer economy - the mad rush for ownership and consumption - to a constructive economy where all human beings can participate in the act of creating lasting worth.

Daisaku Ikeda
Our hopes, desires and ambitions are powerful forces existing within us for the shaping of the future. They are the generating forces that create the future. 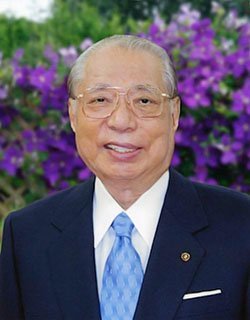 Creative Commons
Born: January 2, 1928 (age 92)
Bio: Daisaku Ikeda is a Buddhist philosopher, educator, author, and anti-nuclear activist. He served as the third president and the honorary president of the Soka Gakkai, the largest of Japan's new religious movements.
Known for: