The best
Thing we can do is to make wherever we're lost in
Look as much like home as we can.

Christopher Fry
Comedy is an escape, not from truth but from despair; a narrow escape into faith.

Christopher Fry
What after all
Is a halo? It's only one more thing to keep clean.

Christopher Fry
It is the individual man
In his individual freedom who can mature
With his warm spirit the unripe world.


Christopher Fry
After the age of 80, you seem to be having breakfast every five minutes.

Christopher Fry
Religion
Has made an honest woman of the supernatural,
And we won't have it kicking over the traces again.


Christopher Fry
Who apart from ourselves, can see any difference between our victories and our defeats?

Christopher Fry
The difference between tragedy and comedy is the difference between experience and intuition. In the experience we strive against every condition of our animal life: against death, against the frustration of ambition, against the instability of human love. In the intuition we trust the arduous eccentricities we're born to, and see the oddness of a creature who has never got acclimatized to being created.

Christopher Fry
How can we be scrupulous In a life which, from birth onwards, is so determined To wring us dry of any serenity at all?

Christopher Fry
Poetry is the language in which man explores his own amazement... says heaven and earth in one word... speaks of himself and his predicament as though for the first time. It has the virtue of being able to say twice as much as prose in half the time, and the drawback, if you do not give it your full attention, of seeming to say half as much in twice the time.

Christopher Fry
I know your cause is lost, but in the heart / Of all right causes is a cause that cannot lose.

Christopher Fry
What is madness To those who only observe, is often wisdom To those to whom it happens.

Christopher Fry
I do not know why the necessity of God
Should feed on grief; but it seems so.

Christopher Fry
There may always be another reality to make fiction of the truth we think we've arrived at.

Christopher Fry
Thank God our time is now when wrong comes up to meet us everywhere never to leave us till we take, the greatest stride of the soul man ever took. affairs are now soul size the enterprise is exploration unto God. Where are you making for? It takes so many thousand years to wake. But will you wake for pity's sake?

Christopher Fry
We must each find our separate meaning in the persuasion of our days until we meet in the meaning of the world.

Christopher Fry
The skirts of the gods
Drag in our mud. We feel the touch
And take it to be a kiss.


Christopher Fry
How nature loves the incomplete. She knows If she drew a conclusion it would finish her.

Christopher Fry
One day I shall burst my bud of calm and blossom into hysteria.

Christopher Fry
The moon is nothing
But a circumambulating aphrodisiac
Divinely subsidized to provoke the world
Into a rising birth-rate.

Christopher Fry
If we could wake each morning with no memory of living before we went to sleep, we might arrive at a faultless day.

Christopher Fry
I travel light; as light,
That is, as a man can travel who will
Still carry his body around because
Of its sentimental value.

Christopher Fry
Between
Our birth and death we may touch understanding
As a moth brushes a window with its wing.


Christopher Fry
Where in this small-talking world can I find
A longitude with no platitude?

Christopher Fry
What is official
Is incontestable. It undercuts
The problematical world and sells us life
At a discount. 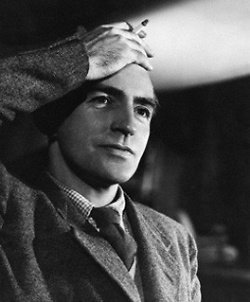 Wikipedia
Born: December 18, 1907
Died: June 30, 2005 (aged 97)
Bio: Christopher Fry was an English poet and playwright. He is best known for his verse dramas, notably The Lady's Not for Burning, which made him a major force in theatre in the 1940s and 1950s.
Known for:
Most used words:
man, time, difference, god, wake