Let us put aside resolutely that great fright, tenderly and without malice, daring to be wrong in something important rather than right in some meticulous banality, fearing no evil while the mind is free to search, imagine, and conclude, inviting our countrymen to try other instruments than coercion and suppression in the effort to meet destiny with triumph, genially suspecting that no creed yet calendared in the annals of politics mirrors the doomful possibilities of infinity.

Charles A. Beard
It may well be that men of science, not kings, or warriors, or even statesmen are to be the heroes of the future.

Charles A. Beard
Jeffersonian Democracy simply meant the possession of the federal government by the agrarian masses led by an aristocracy of slave-owning masses.

Charles A. Beard
If this statement by Judge Cooley is true, and the authority for it is unimpeachable, then the theory that the Constitution is a written document is a legal fiction. The idea that it can be understood by a study of its language and the history of its past development is equally mythical. It is what the Government and the people who count in public affairs recognize and respect as such, what they think it is. More than this. It is not merely what it has been, or what it is today. It is always becoming something else and those who criticize it and the acts done under it, as well as those who praise, help to make it what it will be tomorrow.

Charles A. Beard
At no time, at no place, in solemn convention assembled, through no chosen agents, had the American people officially proclaimed the United States to be a democracy…When the Constitution was framed no respectable person called himself or herself a democrat. 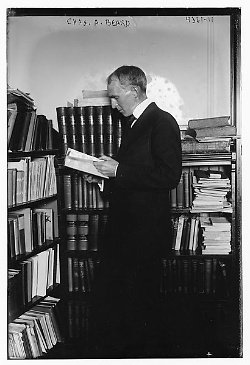 Creative Commons
Born: November 27, 1874
Died: September 1, 1948 (aged 73)
Bio: Charles Austin Beard was, with Frederick Jackson Turner, one of the most influential American historians of the first half of the 20th century.
Known for: