Exploring Mars is a far different venture from Apollo expeditions to the moon; it necessitates leaving our home planet on lengthy missions with a constrained return capability.

Buzz Aldrin
My petite little platinum blonde beauty of a wife suddenly turned into a public-relations dynamo. "The business is Buzz!" she proclaimed, and indeed so it became.

Buzz Aldrin
What are you going to do with astronauts who first reach the surface of Mars and then turn around and rocket back home-ward? What are they going to do, write their memoirs? Would they go again? Having them repeat the voyage, in my view, is dim-witted. Why don't they stay there on Mars?

Buzz Aldrin
We'll get to the details of what's around here, but it looks like a collection of just about every variety of shape - angularity, granularity, about every variety of rock.... The colors - well.... There doesn't appear to be too much of a general color at all; however, it looks as though some of the rocks and boulders are going to have some interesting colors to them. Over.

Buzz Aldrin
I suggest that going to Mars means permanence on the planet - a mission by which we are building up a confidence level to become a two-planet species.

Buzz Aldrin
I believe that space travel will one day become as common as airline travel is today. I'm convinced, however, that the true future of space travel does not lie with government agencies -- NASA is still obsessed with the idea that the primary purpose of the space program is science -- but real progress will come from private companies competing to provide the ultimate adventure ride, and NASA will receive the trickle-down benefits.

Buzz Aldrin
Because of his military service, Dad was buried in Arlington National Cemetery.

Buzz Aldrin
The first footfalls on Mars will mark a historic milestone, an enterprise that requires human tenacity matched with technology to anchor ourselves on another world.

Buzz Aldrin
During the divorce process, I lived alone and tended to get extremely down on myself.

Buzz Aldrin
To me, money is a commodity that a person must have to function, not a goal in itself.

Buzz Aldrin
This has been far more than three men on a mission to the Moon; more still than the efforts of a government and industry team; more, even, than the efforts of one nation. We feel this stands as a symbol of the insatiable curiosity of all mankind to explore the unknown.

Buzz Aldrin
Returning to the Moon with NASA astronauts is not the best usage of our resources. Because OUR resources should be directed to outward, beyond-the-moon, to establishing habitation and laboratories on the surface of Mars that can be built, assembled, from the close-by moons of Mars.

Buzz Aldrin
Mars has been flown by, orbited, smacked into, radar examined, and rocketed onto, as well as bounced upon, rolled over, shoveled, drilled into, baked and even blasted. Still to come: Mars being stepped on.

Buzz Aldrin
There's a historical milestone in the fact that our Apollo 11 landing on the moon took place a mere 66 years after the Wright Brothers' first flight. 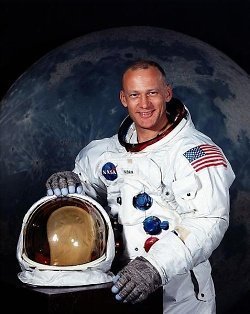 Creative Commons
Born: January 20, 1930 (age 92)
Bio: Buzz Aldrin is an American engineer and former astronaut. As the Lunar Module Pilot on Apollo 11, he was one of the first two humans to land on the Moon, and the second person to walk on it.
Known for: