Bruno Schulz
Now the windows, blinded by the glare of the empty square, had fallen asleep. The balconies declared their emptiness to heaven; the open doorways smelt of coolness and wine.

Bruno Schulz
Animals! the object of insatiable interest, examples of the riddle of life, created, as it were, to reveal the human being to man himself, displaying his richness and complexity in a thousand kaleidoscopic possibilities, each of them brought to some curious end, to some characteristic exuberance.

Bruno Schulz
How can one not succumb and allow one's courage to fail when everything is shut tight, when all meaningful things are walled up, and when you constantly knock against bricks, as against the walls of a prison?

Bruno Schulz
Lifelessness is only a disguise behind which hide unknown forms of life.

Bruno Schulz
"the sound of a barrel organ rising from the deepest golden vein of the day; two or three bars of a chorus, played on a distant piano over and over again, melting in the sun on the white pavement, lost in the fire of high noon.

Bruno Schulz
My ideal goal is to "mature" into childhood. That would be genuine maturity.

Bruno Schulz
And one's wandering proved as sterile and pointless as the excitement produced by a close study of pornographic albums.

Bruno Schulz
So, it comes to pass that, when we pursue an inquiry beyond a certain depth, we step out of the field of psychological categories and enter the sphere of the ultimate mysteries of life. The floorboards of the soul, to which we try to penetrate, fan open and reveal the starry firmament.

Bruno Schulz
Man was entering under false pretenses the sphere of incredible facilities, acquired too cheaply, below cost price, almost for nothing, and the disproportion between outlay and gain, the obvious fraud on nature, the excessive payment for a trick of genius, had to be offset by self-parody.

Bruno Schulz
Could it be that time is too narrow for all events? Could it happen that all the seats within time might have been sold? Worried, we run along the train of events, preparing ourselves for the journey.

Bruno Schulz
The days hardened with cold and boredom like last year's loaves of bread. One began to cut them with blunt knives without appetite, with a lazy indifference.

Bruno Schulz
Even in the depths of sleep, in which he had to satisfy his need for protection and love by curling himself up into a trembling ball, he could not rid himself of the feeling of loneliness and homelessness.

Bruno Schulz
As we manipulate everyday words, we forget that they are fragments of ancient and eternal stories, that we are building our houses with broken pieces of sculptures and ruined statues of gods as the barbarians did.

Bruno Schulz
An event may be small and insignificant in its origin, and yet, when drawn close to one's eye, it may open in its center an infinite and radiant perspective because a higher order of being is trying to express itself in it and irradiates it violently.

Bruno Schulz
Ordinary facts are arranged within time, strung along its length as on a thread. There they have their antecedents and their consequences, which crowd tightly together and press hard one upon the other without any pause. This has its importance for any narrative, of which continuity and successiveness are the soul.

Bruno Schulz
Under the imaginary table that separates me from my readers, don't we secretly clasp each other's hands?

Bruno Schulz
Reality is as thin as paper and betrays with all its cracks its imitative character.

Routine is not organization, any more than paralysis is order.
Arthur Helps 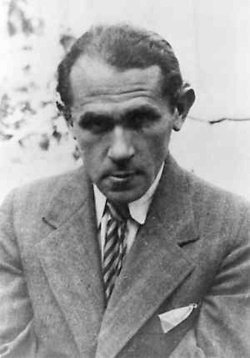 Born: July 12, 1892
Died: November 19, 1942 (aged 50)
Bio: Bruno Schulz was a Polish writer, fine artist, literary critic and art teacher born to Jewish parents. He is regarded as one of the great Polish-language prose stylists of the 20th century.
Known for: