The terrorists today are much the same as those we fought in WW II.

Bruce Willis
I wanted to sign up and fight with you guys, but they told me I was too old.

Bruce Willis
If you catch him, just give me four seconds with Saddam Hussein.

Bruce Willis
This is the war on terrorism; it's worth fighting for.

Bruce Willis
I'm staggered by the question of what it's like to be a multimillionaire. I always have to remind myself that I am.

Bruce Willis
You can't undo the past but you can certainly not repeat it. 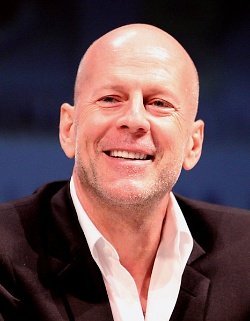 Creative Commons
Born: March 19, 1955 (age 64)
Bio: Walter Bruce Willis, known professionally as Bruce Willis, is an American actor, producer, and singer. His career began on the Off-Broadway stage and then in television in the 1980s, most notably as David Addison in Moonlighting.
Known for: