About shocking. You know I feel comfortable in my skin. I think it's an okay thing to express yourself.

Britney Spears
I'm so blessed with my baby. And I want the most normal life possible for him. And I'll manage, I will create that.

Britney Spears
That driving incident, I did it with my dad. I'd sit on his lap and I drive. We're country.

Britney Spears
I don't have time to sit down and write. When I think of a melody, I call my answering machine and sing it.

Britney Spears
I'm very, very blessed. But my safety, my privacy, and my respect are three things that I feel like are trying to be taken away from me right now. As a mother I have to speak up and say something. I have to speak up.

Britney Spears
There will be a "Oops 100." They'll be plenty more oopses. I'm not perfect. I'm human.

Britney Spears
I look back and think I'm a smart person! What the hell was I thinking?

Britney Spears
Sundance is weird. The movies are weird—you actually have to think about them when you watch them.

Britney Spears
Honestly, I think we should just trust our president in every decision that he makes and we should just support that, you know, and, um, be faithful in what happens.

Britney Spears
Everyone now, they look back and they're like, "What happened to your sweet image that you used to be?" And I'm like, then when you came out you thought I was too provocative. It's like you can never win. No matter what you do, at the end of the day you can't please everybody, you know. I'm not here to please...

Britney Spears
There's always a way. Where there's a will there is a way. You have to believe.

Britney Spears
You have babies at home. And you have a life. And if you don't, you have to realize that we're people and that we just need privacy and we need our respect. And those are things that you have to have as a human being.

Britney Spears
Oh, I've wept. Yeah, I've definitely wept just with the world, you know, how judgmental they are. You know what, I know I'm a good mom.

Britney Spears
I think with anybody who's doing well in the public eye or whatever, there's always gonna be a shift because people don't wanna see somebody happy all the time. And they're gonna try to take shots at people.

Britney Spears
I just want to say that um, I'm just really, really shocked at like how nice our world is because it's just so nice. Like oh my God! Like, the other day, like I was sitting there and I saw these magazines and they said I was pregnant, and like, it's so true. Like America, believe everything you read. Because, like, you're smart and I'm stupid. Like for real. Come on y'all.

Britney Spears
The only person I do worry about, that I want to be a good person for, I think is my responsibility, is my sister. I'm going to be cool for you, okay. I like, I need to, I like being by myself right now. I think it's good for me.

Britney Spears
Carlson: Give me the chronology of the kiss. How did you decide to kiss Madonna?
Spears: Well, actually, in rehearsals, it wasn't something that was like, "Y'know, This is what we're gonna do. Y'know." It was just kinda like we play around a little bit and, um, she said during—before the performance, "Let's just feel it out and see what happens." So I didn't know it was gonna be that long and everything, but it was cool.

Britney Spears
I think honestly if you can wait until you're married I think you should definitely do that, because it's so much more sacred. That you don't go around sleeping with people. But I mean, I really thought I was going to be with him for the rest of my life, I did. 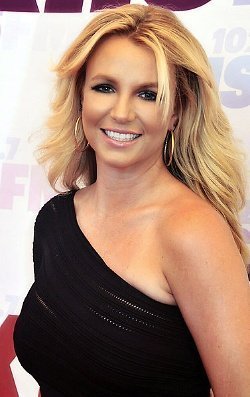 Creative Commons
Born: December 2, 1981 (age 39)
Bio: Britney Jean Spears is an American singer and actress. Born in McComb, Mississippi, and raised in Kentwood, Louisiana, she performed acting roles in stage productions and television shows as a child before signing with Jive Records in 1997.
Known for:
Most used words:
people, person, feel, life