In short, the animal and vegetable lines, diverging widely above, join below in a loop.

Asa Gray
It remains to consider what attitude thoughtful men and Christian believers should take respecting them, and how they stand related to beliefs of another order.

Asa Gray
It is not science - certainly not physical and physiological science - that brings immortality to light, modern science does not really tend to put out that light. Yet, if that light were quenched, "I know not where," in modern science alone, "is that Promethean heat that can that light relume."

Asa Gray
Your candor is worth everything to your cause. It is refreshing to find a person with a new theory who frankly confesses that he finds difficulties, insurmountable, at least for the present.

Asa Gray
It was always understood that plants and animals, though completely contrasted in their higher representatives, approached each other very closely in their lower and simpler forms. But they were believed not to blend.

Asa Gray
The best opinion now is, that there are multitudinous forms which are not sufficiently differentiated to be distinctively either plant or animal, while, as respects ordinary plants and animals, the difficulty of laying down a definition has become far greater than ever before.

Asa Gray
Many years ago it was taught that plants and animals were composed of different materials: plants, of a chemical substance of three elements,- carbon, hydrogen, and oxygen; animals of one of four elements, nitrogen being added to the other three.

Asa Gray
We have really, that I know of, no philosophical basis for high and low. Moreover, the vegetable kingdom does not culminate, as the animal kingdom does. It is not a kingdom, but a common-wealth; a democracy, and therefore puzzling and unaccountable from the former point of view.

Asa Gray
I do not approve either the divinity or the science of those who are prompt to invoke the supernatural to cover our ignorance of natural causes.

Asa Gray
This substance, which is manifold in its forms and protean in its transformations, has, in its state of living matter, one physiological name which has become familiar, that of protoplasm.

Asa Gray
It was implicitly supposed that every living thing was distinctively plant or animal; that there were real and profound differences between the two, if only they could be seized.

Asa Gray
We may take it to be the accepted idea that the Mosaic books were not handed down to us for our instruction in scientific knowledge, and that it is our duty to ground our scientific beliefs upon observation and inference, unmixed with considerations of a different order.

Asa Gray
We have spoken of beings so low in the scale that the individuals throughout their whole existence are not sufficiently specialized to be distinctively plant or animal: yet these are definite life in simpler shape.

Asa Gray
This view, as a rounded whole and in all its essential elements, has very recently disappeared from science. It died a royal death with Agassiz.

Asa Gray
The former conviction that these two kingdoms were wholly different in structure, in function, and in kind of life, was not seriously disturbed by the difficulties which the naturalist encountered when he undertook to define them.

Asa Gray
Natural selection is not the wind which propels the vessel, but the rudder which, by friction, now on this side and now on that, shapes the course. 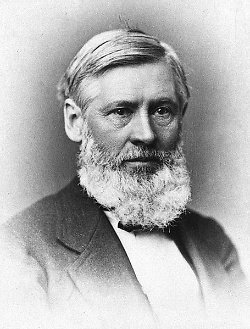 Creative Commons
Born: November 18, 1810
Died: January 30, 1888 (aged 77)
Bio: Asa Gray is considered the most important American botanist of the 19th century. His Darwiniana was also considered an important explanation of how religion and science were not necessarily mutually exclusive.
Known for: