I shall be very careful to preserve and maintain the Act of Toleration, and to set the minds of all my people at quiet; my own principles must always keep me entirely firm to the interests and religion of the Church of England, and will incline me to countenance those who have the truest zeal to support it.

Anne of Great Britain
Whoever of ye Whigs thinks I am to be Hecktor'd or frighted into a Complyance tho I am a woman, are mightely mistaken in me. I thank God I have a Soul above that, & am too much conserned for my reputation to do any thing to forfeit it.

Anne of Great Britain
God be thanked we were not bred up in that communion but are of a Church that is pious and sincere, and conformable in all its principles to the Scriptures.... the Church of England is, without all doubt, the only true Church. 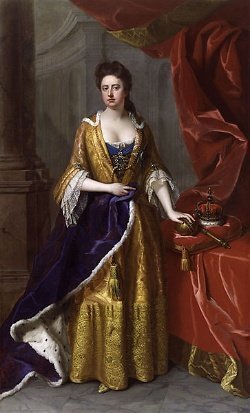 Creative Commons
Born: February 6, 1665
Died: August 1, 1714 (aged 49)
Bio: Anne became Queen of England, Scotland and Ireland on 8 March 1702. On 1 May 1707, under the Acts of Union, two of her realms, the kingdoms of England and Scotland, united as a single sovereign state known as Great Britain.