What can I expect here? You know the fairy tale about the man who died, don't you? He was waiting in Eternity to find out what the Lord had decided to do with him. He waited and waited, for one year, ten years, a hundred years. He begged and pleaded for a decision. Finally he couldn't bear the waiting any longer. Then they said to him: 'What do you think you're waiting for? You've been in Hell for a long time already. 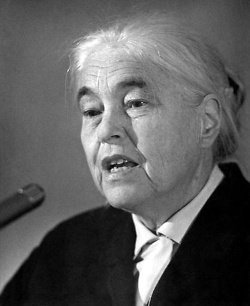 Creative Commons
Born: November 19, 1900
Died: June 1, 1983 (aged 82)
Bio: Anna Seghers was a German writer famous for depicting the moral experience of the Second World War. The pseudonym Anna Seghers was apparently based on the surname of the Dutch painter and printmaker Hercules Pieterszoon Seghers or Segers.
Known for: